All the yearbooks I've featured so far have been from the Emmanuel Bible College. Lest you accuse me of religious bias I'm taking a quick break to showcase a yearbook from the other side of town: it's the 1967 K.C.I. yearbook (called "The Grumbler" then, and perhaps even now), and it's extra-special because it represents the school's centennial!

Well, that WOULD be special, except that it's actually a very dull book. The most interesting sections in any yearbook are underrepresented here: very few shots of dancing, frolicking, and pep-participation, not to mention the strange in-jokes such as this one featuring the Ku Klux Klan: 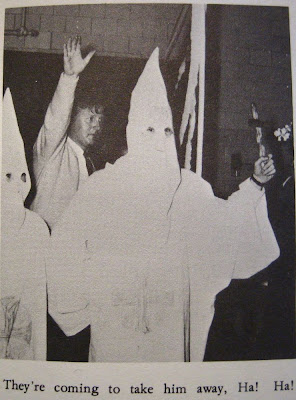 Ha! Ha! Or rather...hmmm...that's highly disturbing and I do not know the context, and I wonder if that man in the background really IS doing a Hitler salute.

Anyway, the best part of this particular yearbook are the extremely flippant graduate students who invariably list "girl-watching" as their occupation. Pretty much all the males do this, from greaser Robert Kavelman...

Get it? "Something to eat!" It's like...homework is such a foreign concept to a guy like Mel, that he doesn't even know if it's FOOD or not!

This "girl-watching" thing reaches epidemic proportions in class 2-10-I, where the students in the all-male class say they like "blondes," "eating and sleeping," "double lunches," and "sports" (though two students say they actually DISLIKE girls, which is possibly an act of rebellion against their more virile peers). Their career goals? "Welder," "truck driver," "hockey player," "plumber," "marriage," "factory worker," "machinist," and "special commercial and sales."

2-10-I was probably the shop/tech class, which would explain the skew in both gender and occupation, though guys throughout the school had a definite interest in cars.'

My mother explained to me that the often-mentioned field of "commercial" -- which wasn't used when I went to school -- meant typing, accounting, and other clerical tasks. This lead us to realize that TELEVISION "commercials" got their name from their original purpose: to raise commerce. You've learned something!

It goes without saying that most of the women in this 1967 yearbook had "commercial" aspirations: secretarial mainly, but also teachers, dental assistants, and a whole lot of "travel." My mother confirmed that at the time -- when she was herself entering the job market in this area -- those were by far the best options for local women. Only super-achieving and very rich girls went to university.

Okay, okay, I know you want to hear about the Bad Yearbook Poetry. There's actually a selection of GOOD poetry in here, but my favourite is a happy little ditty called "Death." Here's an excerpt.

Enter into my body and steal my breath,
Freeze my heart and chill my blood.
Then flee to the stars with my soul,
And we will, hand in hand,
Go tripping through the idle corpses,
On towards that celestial empty world
Of lonely, forgotten, unfilled souls.
Death, come and be my friend.

This was written by a particularly cheery girl named Susan Moses, who lives up to her poem in her photograph. 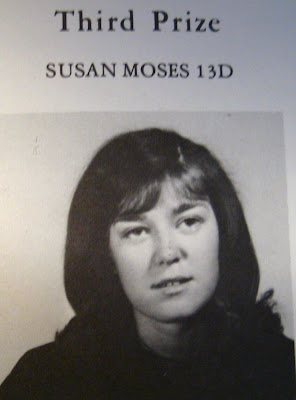 These are the kids that the teachers worried about. I know because I was one of them.

Because I'm vicious, here's a picture of the Science Club, presented to you without comment, except to say that teachers probably worried about them too. 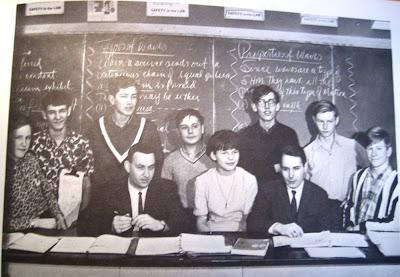 For the esteemed king and queen of the yearbook I chose two of the "beautiful people." First is John Carr, who my mother assured me would have been "a real catch," not least because he wanted to be a chartered accountant. John stands out as by far the most handsome clean-cut rebel in the book.

I wanted to give him a sweet queen, so and I picked Jennifer Collins who I assume was from the wrong side of the tracks (but only slightly). My mother confirmed that aspiring hairstylists in 1967 were borderline dropouts who saw beauty school as a better alternative than factory work.

Congratulations, John and Jennifer! I hope you're happy! And Jennifer, even though you supposedly like "everything," I hope you don't end up working for Salvatore. 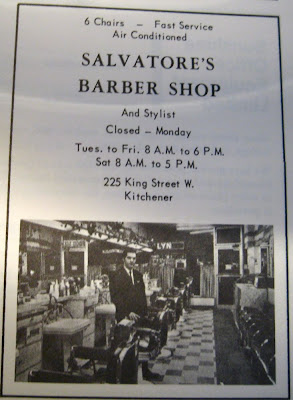 Posted by Adam Thornton at 7:03 AM

Didn't Salvatore's Barbershop move to the mall in Waterloo that had the tiny Zehrs in sunny "uptown waterloo"? It vertainly looks like it!

Which mall is that? I don't recognize Salvatore, but I'd definitely be interested in learning more!