Tolkien II: The Fell Rock Which Lived in Shadow

As part of my "Tolkien-athon" -- hardly an Elvish word but I'm no Eldar -- I just finished reading "The Silmarillion," a task for which I was both encouraged and discouraged by opposing Tolkien fans.

Mr. Old Goat told me it would give me a rich mythic background for my next excursion -- re-reading "The Lord of The Rings" -- and he poo-poo'd conventional wisdom that the book is obscure or difficult to read (though maybe he was taking into account my general love of difficult fiction). He thinks "The Silmarillion" is beautiful and he reads it regularly.

MadKevin apparently has an equal love for the book, but he also had this to say:

Having finished the book, I agree with both points of view. "The Silmarillion" HAS given me a deep foundation -- and appreciation -- of the LOTR mythology, but it is certainly NOT for the casual reader, and it could have gone through a few more drafts before publication (I know why it didn't get those revisions, and I know that it was never intended to be published in this form, etc.)

Tolkien had wonderful ideas. His foremost strength was his deep passion for his subject matter; it seems like he pretty much lived and breathed Middle-Earth.

He was also extremely creative, though not endlessly so. There's only so many ways to describe the political wrangling of a bunch of flawed, overreaching, and greedy kings, and it's not surprising that many of the stories in "The Silmarillion" follow the same general theme: King Fröeekinthräff, son of Fröeekonthräff and brother of gloomy Fröeekonithräff, desires something because of some mix of nobility and greed. He is misled by the servants of Morgoth or his methods become twisted by an ancient curse or vow. He achieves great things but -- in the process -- brings about the doom of a loved one. He almost dies but is healed by somebody he had wronged. This healing causes him to finally see things clearly, and his guilt causes him to retreat from the world, "and the tales speak of him naught from that point onward."

Some parts of "The Silmarillion" are sketchy, and others are fully-fleshed. Oddly enough it's the sketchiest tales that resonate most for the first-time reader, because they don't burden the narrative with endlessly-branching family trees. Tolkien LOVED complicated kinship tales -- the book is one long meditation about bloodlines which either stick together or betray each other -- but not even the genealogical tables can help you keep the characters straight, especially not when you're also expected to remember about a hundred locations in Beleriand, each with a different name according to the time period and language used, and then the geography is constantly being rearranged by warfare, and THEN you realize that none of these places are in The Lord of The Rings anyway!

For giggles, I present the line of Túrin and Nienor. Having carefully followed the Valar and Elvin names I simply gave up on the men. It didn't help that the men had shorter lifespans and bred like rats. 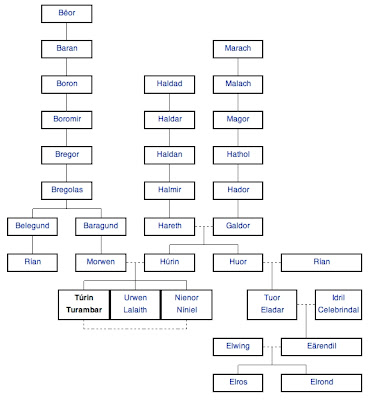 I think it's really sad that none of Bëor's children were named "Borax."

So yeah, it was wonderful and maddening, but it's not like you can blame Tolkien (except for his overuse of the word "fell," and the way caves were carved out of the "living rock" and shadows behaved like floating mist). I think it's wonderful that we get to read the book at all, and I'm actually glad I decided to read it before going on to the Great Big Trilogy.

But like MadKevin has said, unless you're a "Tolkien nerd" (like him) or an obsessive completest (like me) you should just stick to the summaries posted on Wikipedia.
Posted by Adam Thornton at 1:22 PM