Most of us probably felt music in a more pure and mysterious way when we were children, as opposed to the critical outlook we adopt as adults. When I was a child I had no idea how music was actually MADE, or why anybody would WANT to make it...I just opened myself up to an album and accepted it for what it was, mixed with the bizarre magical thinking of an imaginative and introspective childhood.

Fortunately my mother viewed music in a similar way, and in fact she still does. Some of my fondest memories are of listening to scratchy vinyl records over and over again in our farm's living room, and actually being ENCOURAGED in my love by both my mother and father. In that sort of environment the music seemed to get INTO me in a way that I still can't describe, and in a way that music rarely does nowadays unless it's really wonderful or I'm slightly drunk and very happy. 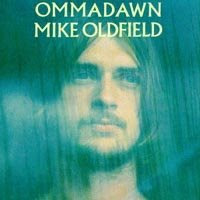 One album that I listened to endlessly was Mike Oldfield's Ommadawn, released in 1975. His third "classic" album, it combined the best of the first two and was therefore much more complex and varied. The whole thing is amazing, but the highpoint is definitely the last seven minutes of side one. It's a classic "musical moment" which music reviewer Karl Dallas described this way:

High whistles play the second, descending theme slowly, almost as if the whole side is coming to a gentle close: and there is a sudden break, the drums are upfront, and voices chant words which may or may not have coherent meaning. It is impossible to hear the words, but the effect is electric.

This section starts out very quietly with just the drums, the voices, and the tinny reeds of a monophonic synthesizer. The "drums" are a sequence of overlapping and increasingly polyrhythmic African drum loops...as this final section of the song progresses the loops are subsequently overdubbed, gaining more and more high-frequency taps which echo back and forth. A warm xylophone appears. Oldfield's guitar sings all by itself, no-nonsense but human in tone, like he's explaining to you how he feels while listening to these beautiful and exotic sounds.

The "voices," though...oh, the voices! It's Clodagh Simonds singing back there. Her syllables were actually Gaelic and they sound vaguely pagan and somehow powerful. Oldfield tended to use "pretty" singers like Maggie Riley on his later albums, but Simonds' voice is something other than pretty; it's adult, mystical, and a little scary.

What makes this section so amazing is that Simdons' multi-tracked vocals are actually being shouted, but everything else is so QUIET. To compensate, the producer has pushed her voices way back into the mix, applied lots of reverb, and -- inexplicably -- stripped out her bass and treble so that she truly IS ghostly...a shouting ghost keeping time, adding structure to the building movement, getting louder and louder as the song reaches its end.

And the ending IS the climax. Mike Oldfield has been described as a man of multiple climaxes, able to string you up and up and up until you achieve the ultimate release. The guitar solo at the end of Ommadawn is the PERFECT and most sexual Oldfield climax, rising to a screech as the drums and vocals and keyboards are also screeching...then sustaining...then...

...just the drum loop playing quietly in one speaker, nothing else. The loop plays for over ninety seconds, just one bar over and over again. It no longer sounds exotic or pulsing or pushing, it sounds...well, post-coital. Eventually, far beyond a time which would be considered "reasonable" in a normal situation, the drums fade away, and side one is finished.

This segment entranced me as a child. I could listen to it forever. Everything about it was unique and perfect, but most entrancing were the vocals by Clodagh Simonds, a woman who didn't exist to me as a biography or a picture. Over the years she appeared on a few other Oldfield albums, but somehow it wasn't the same...Clodagh Simonds would always be for me the woman who yelled "Ommadawn" at the end of side one. Other than that she was a complete mystery from thirty years ago.

Then, yesterday, I discovered Fovea Hex. Now I know who Simonds really is.

You can read the details of her life in the Mellow Candle biography if you wish, but you should really check out her current music. "Fovea Hex" appears to be her band for the most part, but it is also a bit of a supergroup collaborations along the lines of .O.Rang, featuring contributions from people she has worked with through the years (including Brian Eno and Robert Fripp, predictably). On a whim -- and out of respect -- I purchased the mp3s from her "Neither Speak Nor Remain Silent" EPs, and the songs "get into me" the same way I mentioned at the beginning of this post...something above and beyond, something magical, something REAL.

Their music is minimalistic, often little more than a harmonium, a vocal harmony, and a background of sly and unidentifiable manipulations. The lyrics are full of gravity and totally without irony...stark poetry. It's sad, but not angsty...just the sadness of every day life as told in tales around a fireside.

If you're going to try one, I recommend the "Huge" EP as the easiest to get into. This is not music to listen to while walking to work, though...
Posted by Adam Thornton at 12:14 PM