Neat Things I Found in My Scrapbox

One of the best things about moving is that I get to rediscover (and often throw out) all the cool things I've been pack-ratting during the last few decades. These things gradually accumulate in a box in the basement, bravely resisting spiders and dampness and being slowly forgotten...until the next move.

Here are some of the neat things I found in my scrapbox this time. At the very least they might add something to the growing internet presence of '90s small-press publishers and authors.

Issue #2 of "Zooomba!" This was an 8 1/2 x 11 'zine produced by Lisa Schwartzman in Waterloo during the early '90s. This issue doesn't have a date on it but I assume it's from 1994. In charming fashion, the cover is a photograph of a tapeworm being pulled from a child's bum.

Lisa was one of the members of "Philler," a CKMS sketch-comedy and audio-weirdness program from 1993 to 1994. Her style of humour was totally left-field...not so much "wacky" as "what the HELL?" She was extremely talented and I'm thrilled to see she's making YouTube videos.

Included in this issue of Zooomba: interviews with King Cobb Steelie, Gwar, and Consolodated. It also contains a brief dream recounted by late CKMS cult-peronality Eddy Schneider: "I had a dream about Groucho Marx last night. Something about duck soup. Pop goes the weasel."

PS: Eddy Schneider was unique. He released three improvisational cassettes of him endlessly riffing on a theme...singing the Star Wars theme for half an hour, for instance. His most beloved cassette was an extended one-man impersonation of race-track noises, which he made by shouting "Vrum-bum-bum-bum!" into a microphone that he virtually swallowed.

Someday I'll put some of his stuff online. You will be amazed.

Volumes 1 and 2 of "Phoenix." Produced and financed by the University of Waterloo's Arts Student Union, this was a nice (but somewhat shortlived) chapbook edited by Shirley Moore, Tamara Knezic, Clint Turcotte, and Lindsay Stewart. I later got to know Clint through the English Society, and I became the sidekick to his "Captain Arts" superhero persona. Lindsay is still very much active in the K/W arts scene...I was always blown away by his contributions to writers workshops and his "Slowpoke" readings at the old Purple Turtle cafe.

"Vampires or Gods?" by William Meyers. I was quite intrigued by Meyer's independent "III Publishing" company. He tended to print books with an illuminatus/conspiracy angle and I was never sure how seriously he took it all. This particular book's thesis is that the mythical immortal heroes -- Osiris, Dionysus, Hercules, Krishna, Quetzalcoatl -- were actually vampires. No, really.

Like all the III Publishing books this one is lovingly produced, but the cover DOES show a chubby man eating grapes in front of a bath towel, which is a bit of a step down in terms of quality and taste. 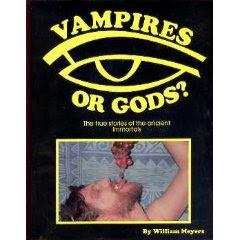 "The Standing Stone" Issue Number One, October 1990. This 'zine was devoted to fantasy and horror and was published by Gordon R. Menzies. It lasted at least three issues, but this is the only one I have, because it contains a pretty childish story by yours truly. It also has a poem by ubiquitous 'zine contributor John Grey, and a piece of art by Clay Boutilier (with whom I was publishing "Lost Magazine" at the time).

Issues Zero, One, and Two of "The Potassium Revue," 1990-1991. Author of "Virgintooth" (a copy of which is also in my scrapbox), this was Mark S. Ivanhoe's text-only collection of musings and journal entries. Neat stuff, very personal...where is he now? 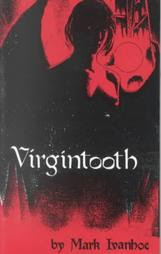 "Zoomers," a collection of "short sharp fiction" produced by Duncan McLean's Clocktower Press in 1990. Duncan was one of my favourite small-press writer at the time. His fiction was intensely Scottish and entirely unique to my virgin ears. It appears that he's still in the writing game.

"Demon Colors" by Gary Lynn Morton, a hand-printed and stapled book of stories and poems, 1991?

When I edited "Lost," Gary was a constant submittor. He'd send me enormous manuscripts -- all of which I still have in my "letterbox" -- and his style was a mix of straightforward prose and bizarre hallucination. Best of all, his detailed cover letters were entertaining and revealed the processes behind each work...what inspired him, why he wrote it, how his job was going.

I really miss Gary and I wonder what he's doing now. Online searches show that he has continued to submit stories to small press 'zines, but I can't find a central repository of information.

"Rantings" by Jim McAuliffe, a chapbook of fiction and poetry, 1992. I met Jim when I started attending workshops and readings in Kitchener and Waterloo, and I still see him around from time to time...he was still organizing local readings just a few years ago, at least. Jim's style was brash and ballsy and I hope he's still writing...

A 1993 letter from Vladimir Orlev, containing photographs of people with scribbled Russian writing on the back. I've never solved this mystery, but I think he thought that "Lost Magazine" had something to do with missing persons. Strange that he'd send this all the way from Velgograd. 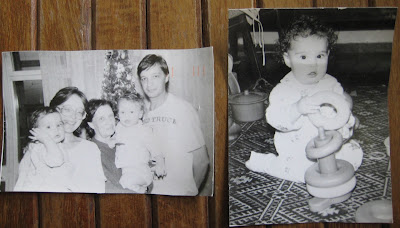 Many issues of "Radio Void," a great big 'zine from Providence RI. For many small publishers this was the 'zine to aspire to: classy, fun, professional. It's where the two-headed small-press hydra of Christopher Pierson and John Grey combined to create something of genius. I don't know what eventually happened to it.

Issues two and three of "A Theater of Blood," edited by C. Darren Butler. His own work seems to have stopped around 1993, but this was an excellent horror/speculative fiction 'zine while it lasted.

Issue one of "The Stake," from III Publishing. Full-colour cover! Weird fiction! Book reviews by J. G. Eccarius, Mr. "Last Days of Christ the Vampire" himself!

Volume Four of "The Otherside," the University of Waterloo's English Society publication from 1991. Featuring stories and poems by the usual suspects (Clint Turcotte, Lindsay Stewart, Jim McAuliffe) and some stuff by...me! I was so excited by this, I felt legitimized.

"Past Tense" by Irvine Welsh, a 1992 Clocktower Press chapbook of "four stories from a novel."

Yes, it's by THAT Irvine Welsh. It may have been the first thing he ever published, selections from the upcoming "Trainspotting." I wonder if this is worth a million bucks now? 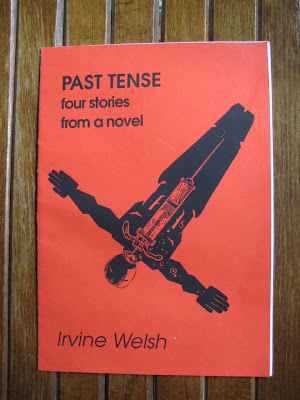 "Reaper's Harvest" Number Two, a big (but somewhat thin) 1990 'zine of over-the-top horror. I think I got this through the usual magazine-trade method. It was edited by David F. Kramer (who appears to be very much in action) and featured a mascot named "Corpsie the Clown."

A big letter "A," number 783 of 1500. One day in 1994, the University of Waterloo students arrived on campus to find these EVERYWHERE. There were literally 1500 of them, enough for every hallway, bulletin board, classroom, and tunnel.

There were lots of theories -- and a bit of an ecological witch-hunt -- but I seem to remember that the final answer (whispered to me by a friend of the anonymous perpetrator) was that it was a celebration of a hard-won grade, though more likely a nifty bit of guerrilla art. 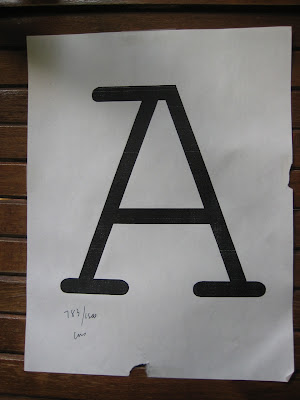 What's in YOUR scrapboxes? Anything fun, strange, exciting?
Posted by Adam Thornton at 11:44 AM