Dr. Seuss and Flit: "An Optimist" 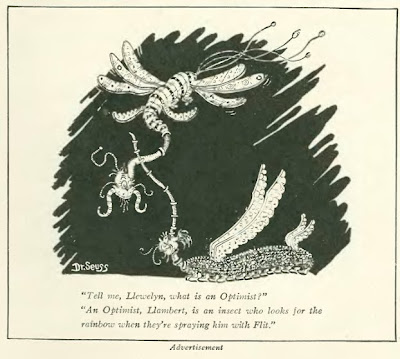 This "What is an Optimist?" schtick was a big thing at one time, but it's hard to know whether it was passe by 1930.

I bring this up because throughout its first year of publication the fledgling New Yorker magazine peppered its pages with the same joke, over and over again:

A man who thinks he can do it in par.*

Sometimes, for variety, they'd reverse it.

A man who thinks he can do it in par.

This was obviously some New Yorker editor's 1925 idea of a joke, and the repetition was also supposed to be funny, but...well, I hereby admit that I didn't get it. Eventually it seemed like something they were doing just to fill the occasional half-inch of blank column.

* (I'm paraphrasing a bit because I haven't read those issues in several years, but the joke appeared so often that I think it's permanently engraved in my mind).
Posted by Adam Thornton at 7:55 AM

I don't know about the "optimist" joke, but these two outrageous-looking "insects" seem British - they could be members of a gentleman's club, where they puff on cigars whilst reading the papers or discussing politics.

Maybe its their 19th century-looking "moustaches"?

What was good 'ol Dr. Seuss smoking when he conceived this ad?

Whatever it was, I suspect he smoked it right up to the end of his life!