The Unsolved Mysteries of Williamson and Voynich

As annoying as Penn and Teller's "Bullshit!" program can be, one of their comments has really stuck with me. During a program about cryptozoology, Penn said that there are enough real and established unsolved mysteries in the world that we shouldn't become obsessed with ones that are merely tenuous.

The obvious examples involve both the huge and the tiny things that science is actively probing: cosmology, subatomic particles, and genetic material. But I'm equally (if not more) fascinated by the little, somewhat mundane oddities that pop up now and then.

Just in case you are too, here's an example: Williamson's tunnels. In the early 1800s, a rich and somewhat eccentric Liverpudlian named Joseph Williamson started constructing huge, elaborate tunnels under his property. 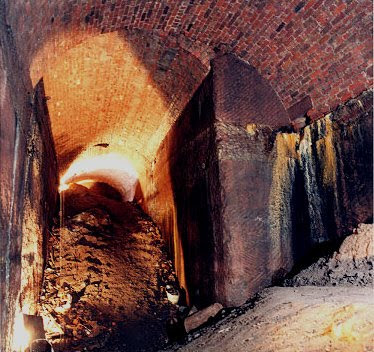 Instead of being objects of curiosity after his death, they were mostly viewed with annoyance; they'd get in the way of new building projects, and housing developers would simply fill them up with rubble -- usually without telling anybody -- so that their new apartment buildings wouldn't fall into them.

Now a small group of volunteers is slowly and methodically uncovering the tunnels, and they're discovering that they're much deeper -- and they travel much farther -- than credible sources would have indicated. It's incredibly difficult for an underfunded handful of people to clear out uncounted tonnes of compressed rubble, but they're slowly making their way through the tunnel network, finding new things all the time.

The mystery isn't just the EXTENT of the tunnels, it's also "Why were they built in the first place?" Nobody really knows yet, but maybe if they travel far enough they'll eventually get some clue. Until then: unsolved and really cool.

A second mystery is one I just learned about tonight, thanks to a brief article in the January 25, 1930 issue of The New Yorker. In 1912, book-dealer Wilfrid M. Voynich publicized the existence of a book that has become known as the Voynich Manuscript. 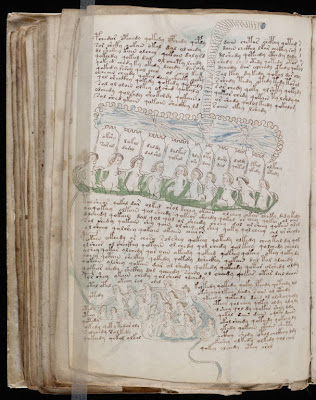 People have been trying to decipher the manuscript for almost 100 years, but they still can't crack its bizarre cypher. If the book isn't simply an elaborate hoax -- which it doesn't seem to be -- then it was written in the 15th or 16th century. It appears to be a biological, astrological, and alchemical treatise and is full of bizarre illustrations, including chimerical plants and naked women bathing in funnels and tubes.

Want to read it? Think you can solve the mystery? Check it out here. And I don't know about you, but I find this sort of thing FAR more fascinating than bigfoot or The Ghost of Henry VIII.
Posted by Adam Thornton at 12:52 AM

How about the "Hypnerotomachia"? I finished reading the novel, "The Rule of Four" recently.

It's centered around a real, 500-year-old manuscript, the Hypnerotomachia Poliphili, that may have secret messages, etc., hiddin within; it also has strange and disturbing graphics. The first full English translation was published in 1999!

The "Rule of Four" was a bestseller a few years back, and is a good read.

Now I have to look into Voynich. Maybe he was lampooning the Hypnerotomachia? Or maybe there were two such items?

The Hypnerotomachia Poliphili looks beautiful! I think it's great that we can get printed versions of these books now...and find our own secret messages.

GeoX, did "The Voynich Manuscript" book give any convincing arguments?

My theory, totally without any scholarly basis: Schizophrenia is not a new medical condition. Surely rich people suffering from creative mental conditions during the 16th century managed to write a book or two...

Various mostly-debunked theories, none of them that stood up very well, as I recall. Mostly, it consisted of a LOT of marginally relevant background information about cryptology.

Of course, there's always this possibility.