And the award for LEAST sexy male apparel goes to... 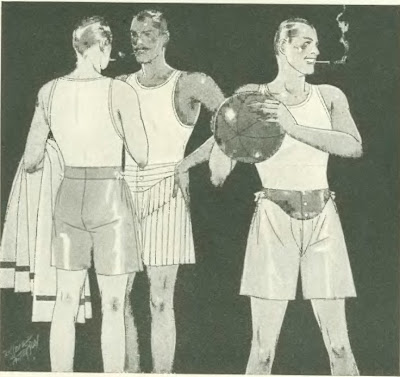 I'm not sure what that entire sentence means exactly, but according to the write-up these jimpants are as "Masculine as a Dunhill pipe" and are "For the man who is really particular about his nether apparel."

What's interesting is that in phys ed we always talked about our "GYM pants," since we wore them in the gymnasium. And even though our pants didn't look like KGB torture devices and we didn't smoke while wearing them, I suppose we never guessed that they were once called "JIMpants." I assume that this was an American-ized version of the term, before they just gave up and used "gym" instead.

Just think, kids...gym could have been worse!
Posted by Adam Thornton at 7:48 AM

Is it gymwear? Is it underwear? I can't tell.

Perhaps neither can "Jim"!

Jim would have to take a close look at his nether regions to find out!