Looking at this advertisement you might be excused for thinking that it was about shirts. 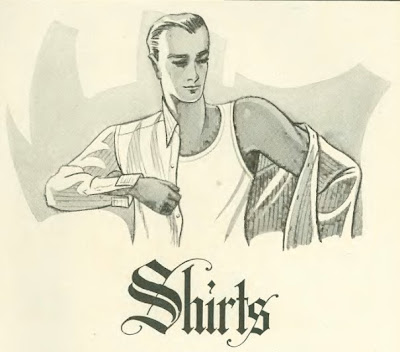 Starting sometime during 1928, various newspapers started advertising in The New Yorker, but they never said anything as direct or uncouth as "buy our paper." No, they'd engage in HUGE acts of misdirection, supposedly to prove the sophistication of their style and the class of their readership, before doing a 180 at the end and saying that if YOU want to be equally sophisticated and classy, you should read their periodical.

This "Shirts" advertisement is the epitome of this style, partly because of the lengths it goes to before delivering the pitch, but also because of the striking -- almost hypnotic -- prose. I'm sad that this sort of marketing copy has long since faded from our magazines, but in fond remembrance here is the advertisement in full.

Most of us, who casually glance at the slight bit of shirt-front which spreads itself across the modest open space of the average man's waistcoat, are not familiar with the fact that once upon a time the very, very meticulous dresser wore a delicate, full-bodied affair of silk or fine linen touched off with quite ladylike embroidered collar and cuffs. However, in those days, a shirt was a poem...today it is something very practical, to be owned by the dozen, with vast consideration accorded variety. Millions of New York men are constantly purchasing shirts...and the smarter the man the wider his collection. It includes everything from well-fitting white oxfords, broadcloths and linens to the refreshing single tones of blue, tan, green, oyster, and, quite naturally, the modest stripings with nicely tailored collars to match...and the dapper dicky bosom with dashing cross-stripes. Indeed, the great shirt makers, and their retail outlets, have left no stone unturned to the end that all shall be bountifully supplied, especially the type of man who reads The Sun...for he purchases freely, and perhaps extravagantly. He values the peaks and valleys of Style and reads The Sun for ripe and authentic news, whether it applies to shirts or ships, boots or baseball, society or shillings.

Posted by Adam Thornton at 1:48 PM

Reminds me of an E. B. White-type essay. Perhaps if Here Is New York had been longer, he would have detailed a New York gentleman's sartorial style.

What's also interesting, for a child of the 1970's, is to learn how colorful men's shirts had been decades ago. In the past, I had thought that the bright colors and stripes of the '70's was a response to the bland, white-shirt-and-dark-ties of the 1960's.

Of course, going through life, we learn that "Everything old is new again!" I mean, don't the harsh-looking eyeglasses with jet-black frames, and narrower ties, look like a 60's resurgence? But it must look so new to those who didn't see it the first time around.

Certainly, those glasses are a return of the "bohemian" look. In the '60s those guys either built crystal radio sets or played bongos!

I too am amazed by the colours of male clothing during the '20s. It certainly DID seem to be a "let loose" sort of era.