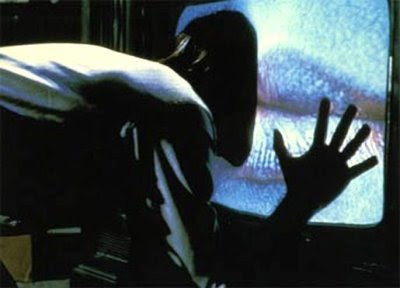 Videodrome was one of those movies that I saw when I was far too young. It was, in fact, the basis of a memorable power struggle between my parents when I was twelve years old, my father forced to put his hands over my eyes during the disturbing parts, while my mother yelled "He's PEEKING! Even a BLIND man can see he's PEEKING!"

She was right, I was, and I probably shouldn't have been because "Videodrome" is a nasty piece of work. It's arguably David Cronenberg's most excessive movie, riding on the then-current wave of "snuff films" and media prophets and arguments about censorship and exploitation. What did I know about that stuff before I'd even reached puberty? How could I possibly understand the explicitly-filmed sexual sadism? And believe me, that's probably the MOST normal part of the movie.

I've mentioned before in this blog the way that certain things -- songs, books, movies -- seemed "magical" when I was a child, because I didn't understand their context and therefore I couldn't think critically about them. Nowhere is this more true than with "Videodrome," with which I was forced to draw connections and conclusions that were wildly off the mark. Now, when I watch the movie, I still get a whiff of those bizarre and inarticulate thoughts that I had as a child, and no doubt that's one reason I love the movie so much.

But more than that, it's just a really spectacular film. Not in a visually-impressive sort of way -- though seeing James Woods with a giant vaginal Betacam port in his stomach is pretty shocking thing -- but in the overall tone. It's detatched and alien. It LURKS. Everything about it is totally unexpected. It is, in many ways, the way that cities like Toronto must look to the lonely and the lost.

Then there's Howard Shore's music, often a droning analog synth without any accompaniment. And the dead-eyed looks in all the actor's faces. And beyond the frankly brilliant premise, the slow realization that evil technocratic horror does not originate in Malaysia...and not even Pittsburg...but rather in the little eyeglass shop next door.

Yesterday at Gen-X we were wondering why David Cronenberg stopped making good movies. We decided that he's just getting older. Thank goodness we still have this film to make us feel awful.
Posted by Adam Thornton at 9:42 PM