"End Credits (To A German Film)" by Pico & Alvarado

When I'm not writing I'm usually working on music, and since I rarely updated the blog this month you know what that means: a new "Pico & Alvarado" song! This one is called "End Credits (To A German Film)" and contains piano and music box contributions by Kathryn Jones:

Here is the usual track postmortem, for those who enjoy that sort of thing. 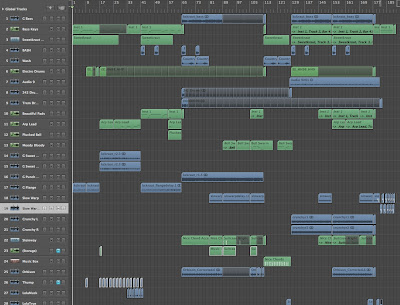 As so often happens, Kevin Cogliano sent me tracks containing a number of electric guitar variations and a bass guitar. He'd envisaged a "Krautrock" sort of song, and though I'm not sure if we achieved that in the end (my knowledge of that genre is still limited) I think we came up with something sort of special.

After adding a Moog bassline of my own (the same pedigree as the one that showed up in "Scrubland") and some stoic electric drums courtesy of EZDrummer, I found myself playing with some samples that I'd recorded on my SP-404 SX hardware sampler. I added a sampled Bif Naked acoustic guitar and a looped country-style guitar courtesy of The Weepies (which you can barely hear), but "Sweetkraut" really kicked into high gear when I added the "BASH" track: a guitar, drum, and bass slam culled from the same Bif Naked track and DRENCHED in reverb.

By delaying the "BASH" until the melody had played a few times we already had our first big hook. I added an abrasive ARP-style synth (the TAL U-NO-62 plugin) and some extremely atmospheric Camel Audio Alchemy pads, and Kevin sent additional guitar figures, and we got very excited indeed...excited enough to call in Kathryn to improvise some keyboard accents that were far more deft than I could have accomplished.

I arranged Kathryn's work throughout the song (using the beautiful Steinway EXS24 samples and the EVP88 for the "music box" middle)...

...but I started to worry because it just kept repeating, and I couldn't think of a way to break out of the melody, particularly considering the wonderful structure that had already been built. I couldn't just tear it all down, and I wasn't even sure if that was the right direction...maybe the repetitions were part of the song's strength, and I was only getting paranoid because I'd heard it 1000 times already?

Kevin and I decided on the latter opinion, and I decided that all the song needed was a bit more punch and variety. I played a Roy Orbison sample with the SP-404 -- using the hardware's live pitch adjustment to conform to the melody, and then using Melodyne to correct the wildly off results (hence the final oddness) -- and added some distorted Front 242 drum loops and the angsty German samples because I like a nice burst of speech (you can figure them out for yourself!)

All that was left was to use pan and EQ to resolve a crucial problem: the "slowarpdelay" guitar, the punchy guitar, the piano, and the "Moody Bloody" Chamberlain melody all shared similar frequencies...and they all tend to play at the same time. I couldn't bring myself to cut any of them out so I spent a lot of time tweaking, riding virtual faders, and sobbing. This was the best I could do. I also had a terrible time removing sample clicks from the guitar fadeout and eliminating a high-pitched artifact in the Orbison sample...next on the list of planned purchases is a good spectral editing program.

Harmonic excitement, a bit of compression, a touch of loudness processing, and...we decided to change the name. "Sweetkraut" suddenly seemed rude when a German woman was shouting during the song. Kevin's new title is much better and adds an evocative touch, I think!
Posted by Adam Thornton at 6:11 PM

Email ThisBlogThis!Share to TwitterShare to FacebookShare to Pinterest
Labels: music, Pico and Alvarado

I have no idea what "deft" means but it sounds badass.

It certainly DOES mean "badass!"