"The Mortal Enemies of Rock and Roll" by Lemurian Congress

Another solo Lemurian Congress song, this one has been in the pipes for a while.

This began as an experiment with Camel Audio's Alchemy, using one of the basic exercises in the manual. I put the closing bars of "Somebody Super Like You" from "The Phantom of the Paradise" into Alchemy, modulated its "location" setting with a Ramp Up LFO, and then modulated that LFO with a bunch of other LFOs to make the playback slide around in a bunch of different ways...

...then, I sent the output through all of my effects processors sequentially, tweaking them as I went along. The result was eleven minutes of howling "DONG!" noises.

I've learned over the years that eleven minutes of howling "DONG!"s does not necessarily become an interesting audio composition. Granted there's value in chill-out ambient or extreme "deep listening," but the flipside is downright tedium.

When I first started making music I was happy to -- literally -- load up two samples into my sampler and then put a lead ingot on one of the keys and let them just play, to find out what sorts of convolutions the samples would get up to. While working with Eli McIlveen at CKMS, however, I became intrigued by his more disciplined approach of cutting longer pieces together to make a single MORE INTERESTING piece.

That's why in "The Mortal Enemies of Rock and Roll" you get a six-minute composition with only NINETY SECONDS of howling dongs, and everything looking like this. 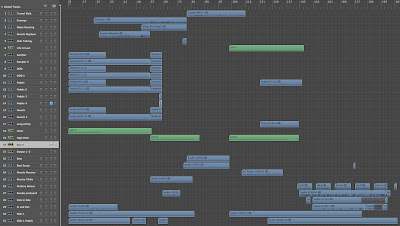 At the same time I was working on the music video for "Sandbar," and I had a bunch of film clips with audio recordings made near a local wastewater facility: crickets, cataracts...and some kids who stumbled upon me crouched in the weeds. Just before the "breakdown" you can hear the kids, a girl who is laughing at a South Park joke her brother just told, then notices me there with my tripod, then yells "Let's GO!" in some sort of complex human response to embarrassment and surprise (afterward one of the kids said "I didn't think old people came down here.")

The source recordings were the hardest to deal with because they were never intended to be used. They were recorded by my crappy little camera and contained a devious bunch of clicks and hums which I struggled to remove...particularly bad were the clicks in the "Let's GO!" sample, which -- typically -- didn't manifest until the project was finished and bounced...I couldn't bring myself to lose the sample but I was unable to get rid of the brain-exploding clicks (like I said, I need a spectral editor), so at the last minute I performed some clumsy level changes. Sigh.

The "Choir" at the beginning was from IK Multimedia's Miroslav Philharmonik, and the high pitch noise was from TAL-U-NO-62's Juno synth emulator, with a notch filter sliding around to make it more interesting.

There are a lot of other odds and ends integrated into the piece, but the most prominent are a series of samples culled with my SP-404 SX sampler. The middle "beat" section is a sample from a Beloved song mutilated with the SP's DJFX looper, and the entire "rock and roll" ending is a bunch of similarly-triggered samples (among them Tim Fuller and Santana) sent through a bunch of filtered auxiliary channels and an auto-wah.

To glue it all together there are some improvised ESQ-1 additions on the last few tracks: the "bomb" noises, the little mouse noises, the "wooooom" noises, and the final guitar-ish accents.

The hardest part of this track by far was the mastering...not so much the ACTUAL mastering, but the WORRYING about the EVENTUAL mastering. I was paralyzed with fear, wondering if an experimental piece like this NEEDED to be mastered. Might the mastering process only be useful for more conventional songs?

My conclusion: no, it's useful for any sort of track, but in a different way. Stereo widening and low-frequency compression can help any song, I think, but loudness processing and harmonic excitation must be used even MORE sparingly than usual.
Posted by Adam Thornton at 10:05 AM