Feeling like my musical development was stagnating, I asked Kevin Cogliano to let me remix some guitar tracks he was working on. I added keyboards and drums to his bass and guitar, then he sent more guitar tracks my way, and before we knew it we had "Sandbar." Kevin and I kicked around band names before we decided on "Pico & Alvarado." I am Pico, and here is our first song.

This was, by far, the most complicated piece of music I've ever worked on. This partly because of the changes that the song goes through, but also because I overdid the "wall of sound" by a factor of ten; many of the subtleties are not apparent in the final mix, and many of them could have been accomplished without duplicating tracks quite so much. See below for the final project (excluding auxiliary sends and buses without automation). 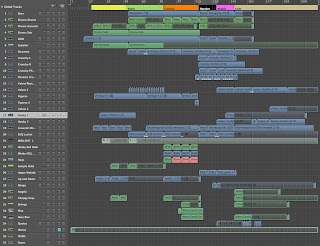 Care to know more? Well, the bass is reminiscent of New Order partly because that's how Kevin plays it, but also due to the Logic Pro Bass Amp plugin set to Top Class DI Mid, and also due to the "Guitar Dream" setting in CamelPhat.

There are four drum tracks, each with multiple outputs for individual treatment. The electronic-type drums are thanks to Toontrack's "Electronic" EZDrummer plugin, and the acoustic drums are from Toontrack's default settings. Both of those were sent to my DOD delay processor for additional weirdness, and some additional "sub" kicks were added with iZotrope's iDrum when necessary.

The guitars! Kevin sent me a whole bunch of guitar tracks...rhythmic pieces, hooky stuff, accents, etc. The hardest part was making sure they all stood out in the mix, and I thank Roey Izhaki's book "Mixing Audio" for panning, reverb, and EQ guidance. The "crunchy" guitars during the "harsh" section use CamelPhat's "Gtr American" setting for added presence. I love all things Camel Audio. I use their plugins in every single project.

The keyboards! Some of them are patches from my ESQ-1 synth, including the primary marimba sound (which is complimented by a Korg M1 Le patch and one of Logic's EXS24 harps). The "sample and hold" synth from the intro is Logic's ES1, and the choppy keys are from the free TAL U-NO-62 Juno-emulation plugin. The angelic keys that end the song are from Camel Audio's brilliant "Alchemy" sampler/synth, Logic's "Strings" plugin, and a bit of bassiness thanks to Logic's ES M soft synth.

The samples? Besides the recurring "brrrr" sound (which I snagged from EZDrummer), there are some crowd noises and quotations from the "Gimme Shelter" documentary...I initially just wanted Grace Slick saying "Easy...easy" to follow the "harsh" section, but I couldn't isolate her voice without making it sound weird. Instead, the "yahoo!" crowd noises found their way in, as well as a brief snippet of a Hell's Angel about to make a speech. Happy accidents!

Add to it all some guitar pedal "wash" effects provided by Kevin, some mixing advice from Vanilla, some Lexicon reverb, and the removal of a whole bunch of extra sounds that didn't need to be there, and "Sandbar" was born!

Then it needed to be MASTERED...which is a story I'll tell some other day. You'll also get to hear about the "video mix" and maybe even see the video (if I ever get around to finishing it). In the meantime you can just enjoy the photograph, which Patrick took with his Holga camera and kindly allowed us to use.
Posted by Adam Thornton at 9:14 PM

Email ThisBlogThis!Share to TwitterShare to FacebookShare to Pinterest
Labels: music, Pico and Alvarado

I'm not kidding when I say that the bulk of the work with this song (and others to follow) was Adam's. From my end, it's like he's magic - I send him a bunch of guitar tracks, and a few days later he sends me a song. It's as if I sent him some pigment in an envelope and a week later he sends me a painting.

Perhaps with the caveat that I don't know how to procure pigment by myself.

You see, Kevin actually knows how to construct SONGS, like, with chords and stuff. The structure of "Sandbar" was admittedly mostly put together on my end (because the original piece was more of a loopy jam), but it wasn't until Kevin said "Hey, I sent you some crunchy guitars" that the song went from "too-long relaxing" to "dynamic super-cool!"

My point: there's a reason I don't make songs like this myself, and it's because I'm unable to.

I would not know how to describe this very enjoyable song, except to say that it's "complex," and very "textured" and "layered."

I can only compare it to some of the best New Age or environmental music that I’ve heard over the years (hope this isn’t an insult; it’s the kind of music "Sandbar" reminds me of).

Thank you for the extremely intricate details of its construction ("construction" seems like the right verb, given the technical work behind it).

I wonder how Mort Stevens would have described his original "Hawaii Five-0" theme (one of my all-time favorites) using your technical descriptions?

Thank you both for sharing "Sandbar"! BTW, Pico and Alvarado are both boulevards in LA, if I'm not mistaken.

Wow... good stuff. It develops really nicely from the quiet intro to the majestic second half. I especially like that intro rhythm and those big "FOOM" noises near the end.

"Pico & Alvarado" were two characters from a few Firesign Theatre plays, and definitely named after that intersection. :)

I love seeing track-by-track layouts of songs! I think it comes from the massive timeline inside Mike Oldfield's "Five Miles Out" album, which showed all 25 minutes of "Taurus II" laid out on a multitrack planning sheet. I wish more people would describe how they developed songs (though maybe it demystifies the process a bit?)

And thanks, Eli! The intro rhythm is sent through an external delay processor set to just a single echo, with the "Repeat" button punched in occasionally to loop the last beat (which rises and falls due to the "depth" function). And the "FOOM" is the ESQ-1, though I may have pitched it down an octave in Logic to make it foomier.