Thrilled with the results of our first collaboration, Kevin Cogliano and tackled the next one: "Style Kitchen." Kevin sent the guitar and bass to me and I added drums, keys, mixing, and mastering, without altering his original style much at all. Here it is (with another great picture by Patrick):

Want more demystifying details? Here's the arrange window for the project, slightly more sane and restrained than "Sandbar" was: 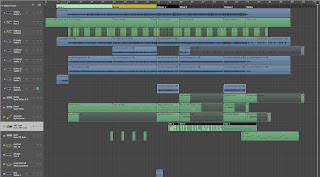 The bass has been treated with some amp simulation and CamelPhat's "Acid Movement" preset, which adds a certain bum-shakiness. There's a rhythmic "jangly guitar" in there which was hellish to separate from the lead guitar, which I tried to fatten by panning two separate instances, detuning one slightly, and carving each a separate set of frequencies in the EQ.

I'm not entirely happy with the lead guitar...it can sound flimsy on some speakers, and there's a terrifying lopsidedness around 3k throughout the entire song (even more terrifying when mastered to bring the guitar out further). But they always say "trust your ears, not the meters," so I decided to just go with it, aware that we were deliberately invoking the tinny-guitar sound of '80s pop. 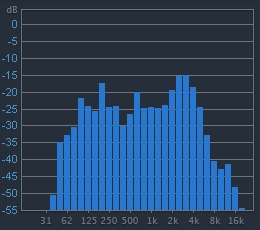 I made the mistake of choosing iZotrope's iDrum for the fundamental drum pattern, because I wanted it to sound like it was programmed on a somewhat limited pattern-based drum machine (which is what iDrum IS). But this program is SO goddamn flaky for me. Every time I wanted to tweak the mix a bit I had to weigh the possibility that iDrum might refuse to give me a workable drum track; about 60% of the time it will miss a beat during a bounce, stuttering a bit, which means you can't even walk away and let the bounce happen, you need to sit and listen to the whole damn thing.

In conclusion: I am finished with using iDrum as a pattern-based drum machine. It turns any sort of serious work into a nightmare, and all their technical support can say is "Have you tried reinstalling it?" I can still use iDrum as a MIDI-controlled sample-playback plugin, but I won't waste any more time trying to get it to do what it's supposed to do.

Reader, if you're looking for a drum machine, do not buy iDrum.

On a plus side I've discovered the joy of Logic Pro's EXS24 sampler, and their Steinway Piano patch is the piano stuff you're hearing throughout. I can't play the piano to save my life, so it's pretty much just a bunch of chords cut up to sound the way I imagine a semi-proficient (but ham-fisted) piano player sounds.

The pad sounds are also thanks to the EXS24, and they're from a beautiful set of Solina multi-samples courtesy of SampleTekk. People swear by them and I love all the samples I've purchased from them (the Solina, the Prophet, the Baroque Organ, and the "Anvils and Churchbells"), but their download procedure is archaic and they provide no installation instructions, just a bunch of samples in a bunch of cryptic folders.

Anyway, the Solina sounds beautiful. I melt every time I hear it, thanks to the opening minutes of Mike Oldfield's "Hergest Ridge."

The lead synth is a layered series of ARP waveforms from SampleTank's "SonikSynth 2" collection, the tinkly bells are from Logic's EFM1, the wobbly bass is actually a funky electric piano pitched very low, and the squishy rhythmic guitar mutilation is -- surprise -- CamelPhat and CamelSpace.

One other thing: I had a high-minded plan to live up to Kevin's proposed "Style Kitchen" title by actually RECORDING myself making food in my kitchen, along the lines of Pink Floyd's "Alan's Psychedelic Breakfast." The song would start and end with eggs cracking, bacon sizzling, and water boiling, and right in the middle there'd be the "DING!" of my toaster oven.

There were two problems with this plan: the only sounds my cooking usually produce are the sounds of my microwave running, and actually recording all that stuff would be a pain far out of proportion to the potential benefits to the song. Instead I just grabbed the "small bell" sample from Logic Pro's library and played with it until it SOUNDED like my toaster oven. Same result, no grease-spattering.
Posted by Adam Thornton at 2:34 PM