The Strangeness of Muffet 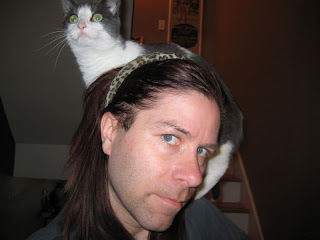 The long answer is that she's incredibly annoying and funny. If she were slightly more annoying or slightly less funny she'd be unbearable, but even when she's going completely bonkers -- ricocheting off walls five feet in the air, for instance, while emitting a constant babble of shrieks and growls -- she is still entirely lovable. And sometimes she knows to leave well enough alone (though rarely).

She's too curious and active. She needs to explore everything, and if she can't climb inside something she needs to either push it or break it. Socks must be removed from sock drawers and shower curtains must come crashing down, usually at 3am. She must also be allowed a certain time on my shoulders, a game which we call "hunchcat" and which sometimes ends with her biting my neck.

Did I mention the fighting? We're always fighting. When she rolls onto her back, that means she wants to mutilate my right hand. I am a bad parent because I do not let her win, and at the end of it all I clutch my bleeding wrist and she looks at me with hatred in her eyes, huffing peevishly.

So yes, she's annoying and requires constant maintenance and she will destroy things if I don't pay attention to her. But I love her to death, and she puts on a convincing charade of loving me. At the roller derby last weekend I sat next to a woman who had to entertain her precocious eight-year-old daughter, and I saw an uncanny reflection of my own behaviour: the coaxing, the distracting, the humouring, the happiness, and the unfeigned tolerance and love.

SIDENOTE: A few months ago she managed to climb the bookcase where I keep her treats, and by the time I caught her she'd eaten half of a full bag. I put the treats in an even higher and more inaccessible spot, and the next day she'd managed to eat the other half. She expanded into a very fat cat shortly afterward and it's been a struggle to maintain her new diet, but let's just say she doesn't get treats anymore and that my shoulders have needed to become a lot stronger.
Posted by Adam Thornton at 7:01 PM