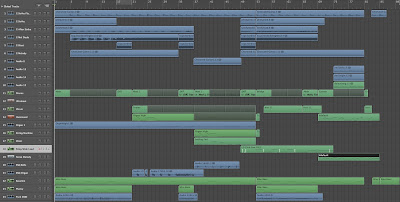 And there you have it!
Posted by Adam Thornton at 6:10 PM

Couple more notes from the Kevin (aka Alvarado):

This is based on a riff I've had kicking around for years, born out of a young teenage-hood of too many Men Without Hats records. (By the way, "Pop Goes The World" is the most overlooked pop album EVER.) Part of the fun of working with PicAdam is sharing a common musical language, so I knew he'd know what to do with this immediately, and I was right.

Ideally, to complete the full musical tribute to the 80s, there should also be a ten-minute long 12" dance remix, with cowbells, electronic tom rolls, maybe a vocoder and a sample of a Southern preacher, with scratching. A boy can dream.

Heck, now that I have my DJ rig I CAN do some scratching! Though the only thing worse than unskilled scratching is...well, there's probably nothing worse.

I agree about "Pop Goes the World," it's an amazing album through-and-through. Jenny wore black!