On Friday night -- hearing that I would be without heat until at least Monday -- Vanilla took me on a whirlwind tour of the city's foremost hardware stores. My apartment is drafty so I decided it would be futile to buy something that gently radiates heat...I needed something that blows like a hurricane and is really frigging hot.

We found it: the Honeywell Utility Heater, which I've nicknamed Big Red. In the picture below, Zsa Zsa and I thaw our frostbitten features before a night on the town: 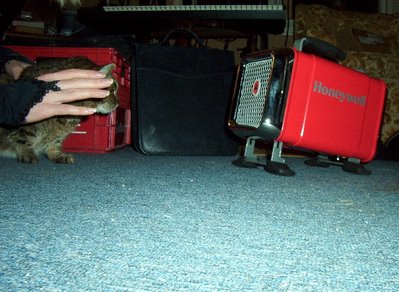 Whenever I get cold I think of William T. Vollman's novel "The Rifles." To research the book he took a solo trip to Isachsen, as close to the north magnetic pole as possible. He did this in March when the temperature hovered between -30 and -40 degrees. Every piece of equipment he brought with him broke down during the first day; his sleeping bag froze solid, his radio received only static, the metal pump for his cooking stove snapped off.

He spent a feverish week waiting for the plane to come back and get him, frost-bitten, hallucinating, shambling through the abandoned weather station trying to stay alive. Reading about his experience makes you feel very cold indeed. Here's a few excerpts, but you should really go ahead and just read the whole thing for yourself.

Every night now he wondered if he would live until morning. He'd read in Stefansson that there was no danger in sleeping when it was cold, that one would wake up when one was chilled, and that was exactly true. But it was still unnerving, to lie down shivering, on the near edge of a dark night, and to know that he'd only get colder and colder. Lying still in the darkness, waiting for the next shiver, he did his best to thrust beyond notice the collar of iron around his neck, the helmet of iron on his face, and the frozen hood behind his head. After awhile, the first drop of ice-cold water ran down the mask and across his nose. The iron collar began to limpen, and water ran down his back. Meanwhile, inside his clothes, the opposite was happening. The sweat on back and buttocks and belly turned to ice...

That night again he thought that he might not survive. The pad of the sleeping bag felt like ice, and probably was. The down was clumped into frozen pebbles whose sharp edges had worried holes in the nylon shell of the bag. He closed his eyes, and saw a fire in a fireplace, with andirons; he dreamed of a warm woman hugging him. When he woke up, he'd slept three hours. The collar of his sleeping bag, thick and white with frost, stuck painfully to his throat. He was suffocating in his own breath-ice. In the darkness he could not feel hs arms and legs. His back and buttocks ached sharply with cold, and he was shivering. He was cold deep inside his belly.

He put on his boots and went outside and walked a mile until he was warm enough to think...

There was a mountain straight ahead of him, soft, white and saddle-shaped. Its base was shaded in snow as in a fog. Above it, nary a cloud. He decided to walk toward it. He'd never have the chance again. The new-exposed strata of snow were hard and off-white like gypsum. There were lemming-tracks in the snow. He followed them. They paused in a wide and shallow hole in which the animal had left urine and a few specks of excrement like sunflower seeds, and then they went on and then a fox track joined them and then both tracks ended suddenly in the new-blown snow. As he walked toward the beautiful mountain, he was suddenly filled with pity for everything in the world, and he cried.

So I'm not THAT cold. But just in case I ever AM, I keep his three big tips in mind:
Saturday night I returned from the bar, turned on Big Red, popped a treat in the microwave, and the power in my kitchen, bedroom, and bathroom went out. I clattered into the basement to try to find the breakers or fuses, couldn't find anything that looked definite, and got myself a nasty shock. The next day the landlords were amazed to discover that I've lived here six years without ever noticing the breaker box above my stove, but here's me finishing off "The Name of the Rose" during that dreadful night: 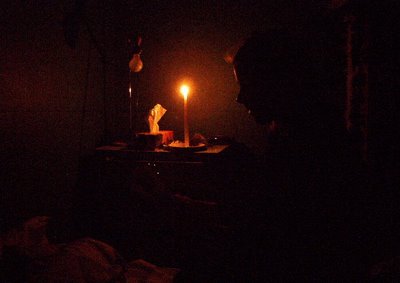