Musical Moments: If There Is Something

A while back Eli posted a list of five musical moments, that is, moments in a song that make you go "ARRR!" with delight.

I wanted to put my own list together but I realized this would be even more subjective than a list of rare perfect albums; the most obvious "musical moments" would leap to mind first, resulting in a list of twenty-five songs where I say "they go up an octave at the end and I get goosebumps." Not useful, the equivalent of Madonna and Michael Jackson winning 95 of the Top 100 Viewer's Choice Best Videos of All Time Awards.

So I figured I'd post "musical moments" when I came across them, therefore:

"If There Is Something (Live Viva! Version)" by Roxy Music.

If you've never heard it, the song -- from their first, self-titled album -- is really three songs in one. The first part is a ridiculous, embarassing Texas ho-down complete with twangy slide guitars, a fiddle, and Bryan Ferry doing his worst C&W hiccups, singing somewhat cryptic lyrics about trying to be in the place where a special somebody might think of looking for him.

This segues shockingly into an over-emotional, sparse, I'd-do-anything-for-you dirge. The tension -- and the Mellotron -- builds, but all the instruments slowly fade down to just Paul Thompson's mechanical, thumpy drums.

And this is the moment: Bryan Ferry, voice cracking from an excess of volume and emotion, breaks in with the final, simple, evocative, uplifting lyrics, under which the the instruments gradually return in a hypnotic and repetitive refrain:

This is when you pick up your cat, swing her around the apartment, and sing along as your heart jumps out of your chest and into heaven for the final sixty seconds. Sixty seconds of BLISS!

I single out the live version on their "Viva!" album because the silliness of the first segment is toned down and the middle portion is extended to a ridiculous length, giving every band member a solo. Therefore when the final segment begins you're really READY for it.

I'm not fond of the version on their 2002 "Live" album, however, as it's one of the few moments when backup singers manage to SPOIL a song. Instead of hearing Bryan Ferry's painful and exultant howling we hear a lot of sweet voices that can't carry the required emotional load.

It seems to me that many percussionists are playful eccentrics; every time I see a concert video the percussionist has a streak of individuality and is more than a little strange. From the bald guy who toured with everybody from Roy Orbison to George Harrison during the '80s (and who can be seen playing sax in the "not stupid, but definitely a sexual metaphor" version of Harrison's I Got My Mind Set On You video), to spastic Steven Scales (who I'd show you a screen capture of if my DVD copy of "Stop Making Sense" didn't cause my computer to crash), to the lovely Julia Thornton. 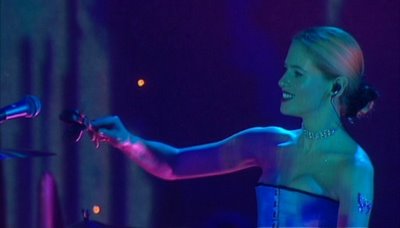 Julia Thornton using what seems to be a specialized type of castanet, which produces a precise quadruple snap.

You can see Julia Thornton's deadpan oddness on the Roxy Music "Live at the Apollo" DVD, as well as on the "Bryan Ferry in Concert" DVD. Her fashion sense is eccentric to say the least, and she plays percussion like she is simultaneously loving it and feeling embarassed about it. She particularly shines in "Mother of Pearl," the call-and-response of which always makes me think of The Rocky Horror Picture Show ("Well I was up all night--" "AGAIN?") ("...thus even Zarathustra--" CLAP-CLAP!) ("...a few throw-away kisses--" SMACK-SMACK!) ("...just give me your--" "FUTURE...")

What's up with percussionists? Do they feel insecure because their niche is so specialized and so many of their instruments are used to just add variety to what the wage-earning band members are playing? Is it because they need to have an encyclopedic knowledge of obscure types of gongs, the names and specific uses and histories of which nobody else cares to know? Were they the slow children in music class who had to choose the Temple Blocks after the other kids had taken all the COOL instruments?

I don't know, but I DO know that -- while trying to figure out what the hell Ms. Thornton is holding in the picture -- I've discovered that this whole percussion business is more organized and complicated than I thought. You've got idiophones, membranophones, chordophones, aerophones, and controversial electrophones. Some of them have definite pitches and others produce sounds that are too complex for pitching. You can make a lot of them at home. You can become your own percussionist. Hmmm...maybe this gongs-and-rattles stuff is pretty cool after all...
Posted by Adam Thornton at 6:35 PM

You hit it right on the nose! There are too many sweet voices that can't carry the emotional load of a song. The Blues seems to understand this well.
I can vouch personally that drummers are a different breed. And I'm not talking about those group of dirty hippies in the park with African hand drums. Although, they are 'different'.

The drummer (and often bassist) in the band tends to be like the engine of the car, keeping it running, chugging along, pretty much the basis of everything else but rarely noticed by the person IN the car.

Whereas a percussionist -- in a rock band -- is the ashtray, the power windows, the mudflaps, the vanity plate. They add greatly to the comfort and variety of the music, but they rarely seem essential or "serious." Which might be why bands rarely feature percussionists, and why the maligned backup singer gets stuck with the tambourine.

As for drumming in the park...I'll get to that in a future post about boodles. :)

I've been playing a lot more percussion lately in my oddball jams, and I'm really enjoying it.

Some things I've noticed in the bands I've been in:

Lead guitarists (and other soloists) might as well be on another planet. They're a completely different species from me. They're some sort of bird or brachiating primate, whereas we in the rhythm section are some kind of mild-meldy undersea creatures. We (I speak as a bassist) form the structure, the foundation, and they run around on top of the building, or flap around in mad circles in the same general vicinity.

Percussionists sort of straddle the two worlds. They - or we, I guess it is now - do rhythmic stuff, but we also change up a lot, because you can't use a triangle on every single song. And like soloists, we're freer to play with different sounds. We go around banging on anything that looks like it might make a neat noise.

I've always wanted to be the Joe Nanini in a band. Oh, or David Van Tieghem - I just saw Home of the Brave again.

Oh, and I really like that last part of "If There Is Something" too. What a crazy song - it's like one of those Exquisite Corpse drawings.

Also, that should be "mind-meldy", above.

Also, it occurs to me that I only listed four "moments". I'll have to come up with a fifth.

Along with the lead singer, the lead guitarist DOES seem to be like a strange flapping bird; the stereotype is that they're egocentric show-offs. Then there's the rhythm guitarist, who is also in that strange place between "percussion/bass" and "lead guitar," providing "chug" but also "melody" and "frill."

A while back I read a fan review of Klaatu's "Hope" album, which compared the often-bass player (John Woloschuck) with George Harrison, saying they both carried more melody than the bass is usually allowed in a song (which is hardly surprising as Woloschuck was unashamedly apeing George Harrison to begin with).

But I'd never thought of the bass in that way, and now whenever I hear it I think "wonderful!"

I definitely see what you're saying about percussionists needing to "mix it up." I guess it's similar to the keyboard player usually needing to use more than one patch, but since the "mixing it up" is so much more visible ("now he's using the triangle...now he's playing bongos...now he's...WHAT IS THAT THING?") I guess it's more glaring with percussion.

Jeez, "Home of the Brave" is so wonderful, and no sign of a DVD release last time I checked...I think Laurie Anderson's not too fond of it, she's said that the recording/directing/editing process was a nightmare and that "you should never look at your own face that much." Besides Tiegham, every musician in that movie is a stand-out...I guess they had to be in order to be "game." Sadly Joy Askew has never really resurfaced...

As for Nanini, I've got wonderful Wall of Voodoo bootlegs that really show him off. Sadly he was the first to go, then Mark Moreland...

I haven't performed live as a percussionist, but when I do (at the end of this month, in fact), I will definitely be one of those spazzes.

I'll always remember the first time I saw a clip of Tito Puente playing. Now there's a madman - he seemed continually amazed and startled by the sounds coming out of his instruments. Brilliant.

Okay, I'm definately going to cut 'percussionists' a break, because I just remember the time Muffy & I went to see Laurie Anderson at The Phoenix, and her percussionist was freak'n awesome. Truly a sound artist, not a rhythm keeper. Also, I remember seeing an opening band for Spoon, and while I don't remember their name, I remember their percussionist was situated at the front of the stage, not back. Again, he stole the show.
I can only imagine that percussionist must have a chip on their shoulder. I mean, how do they explain to the general public what they do? And if they are mediocre instead of exceptional, how do they justify their work as "not a drummer".

Yeah, Laurie Anderson's percussionist on her 2001 tour was brilliant! I seem to remember him having a programmable MIDI lap-pad that he tapped and dropped weights on. There seems to be a sub-type of drummers who are drummer/percussionists... Rob Kloet from the Nits is definitely one.

These types of drummers spend half of the time keeping the beat, and the other half surprising you with the sounds they're making.

As far as straight percussionists go there was Alannah Currie of the Thompson Twins. Conventional wisdom at the time was that she and Joe Leeway didn't really do anything in the band and were only there to give it a trendy multi-gender, multi-racial appearance.

Which makes me think of ABC's middle period when they hired two band members who LITERALLY did nothing and were only there because one was sexy and the other quirky-looking.

Then Paul Morley from Art of Noise, who pretty much just proposed song titles and wrote the liner notes. I love J. J. Jeczalik's response when asked how much Paul Morley and Trevor Horn were responsible for in the band: "We say approximately 1.73 percent, but it could even be as high as two percent."

Julia Thornton looks like she is in full control of the music.Julia is very good looking.it is a lot of fun playing percussion.I learnt at school.