Every week, the "prohibition era" issues of The New Yorker offer -- maybe sarcastically -- new drink mixtures. This one is from March 26, 1927:

"Lipstick" cocktail, so named by its inventor, Mr. Barney Gallant, because it tastes sweet and innocuous and has an awful wallop--Two parts champagne, one part gin, one part orange juice, dash of grapefruit juice, and a flavoring of cherry brandy. Shake rapidly with single chunk of ice. 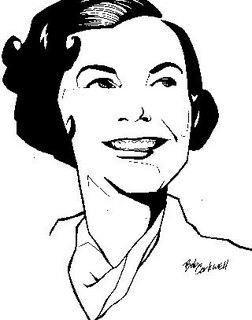 This one is obviously referring to Lois Long, the fashion and nightclub columnist for the New Yorker. Lois was successfully incognito for many years, signing her columns as either "Lipstick" or "L.L." and firmly stating that she was neither person. She married Peter Arno -- archetypal 1920s artist who developed the weird "Whoop Sisters" cartoons -- and they were notorious for their drunken romps through the New Yorker offices.

Lois has languished in obscurity for half a century. The republication of the old New Yorker magazines, followed by the 2006 book "Flapper," have reignited her fame. Notwithstanding what may be a stronger than usual strain of racism in her writing -- she enjoys "slumming" in Harlem nightclubs, where she makes mention of "pickaninnies" and such -- her amusing but factual reviews are the highlights of the early "not serious" stage of the magazine.

Tom Thomson presents one of the more commonly-quoted anecdotes about Long:

One evening when managing editor Ralph Ingersoll stopped by the office after regular working hours, he was dismayed to find the magazine's star cartoonist, Peter Arno, lying naked on a sofa with "Tables for Two" columnist, Lois Long.

Years later Long said, "Arno and I may have been married to one another by then, I can't remember." On second thought, she added, "Maybe we began drinking and forgot that we were married and had an apartment to go to."

Posted by Adam Thornton at 7:24 AM