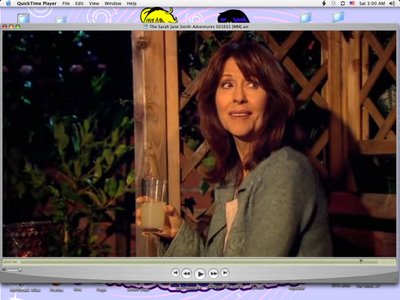 I figured: okay, I just spent a great night in Guelph with wonderful people at a wonderful party...I can go home and enjoy a totally nerdy persuit, right?

So I watched the pilot episode of the "Sarah Jane Adventures."

Gah! Okay, it's a show aimed at pre-teens. Obviously. But those of you (like me) who grew up watching Sarah Jane Smith in the late '70s during the heyday of "Doctor Who" can't help feeling a little nostalgic about her. Or in this case, a LOT nostalgic.

The Sarah Jane character got unceremoniously dumped in 1976, the way many of the Doctor Who "companions" got dumped when things just weren't working out. Elizabeth Sladen (the actress) felt that the character wasn't going anywhere, and she was right...there's only so many times you can say "Doctor, WHAT'S HAPPENING?!?" before things get a little tiresome.

But the problem is, Elizabeth Sladen never went anywhere afterwards. She'd been typecast. And we all loved her and wished we could see her again (though I admit that Leela and Romana kicked butt as travelling companions afterward).

On the heels of her brief return during the second season of the new Doctor Who, introducing a whole new set of neuroses, Elizabeth Sladen stars in her own TV series -- "The Sarah Jane Adventures" -- which is really darn fun. I mean sure, I'm twice the age of the target demographic, but that doesn't matter: Elizabeth Sladen has aged beautifully, she's got a killer pair of boots, and the production team does a great job aiming at children while still being fun for adults.

Besides whatever entertainment value the program has, it makes me happy to see Elizabeth Sladen back on screen again. She has justified her talent, she's a great actress, and if the only way she can prove it is by playing the same character again...well, sad but okay. And need I mention John Leeson as K9?

Okay, okay, the core of this post is the little kid in me screaming "YAY! K9 AND SARAH JANE! AND THEY'RE GREAT!" Nothing else matters. Tomorrow, life goes on.
Posted by Adam Thornton at 3:08 AM

Email ThisBlogThis!Share to TwitterShare to FacebookShare to Pinterest
Labels: Doctor Who, nostalgia

I'd like to come up with some analogous situation from the tv sf of my misspent youth, but...no examples. George Reeves becomes Ben Affleck in "Hollywoodland," and Jimmy Olsen (Jack Larsen) and Lois Lane (Noel Neill) live long enough to star in a remake FIFTY YEARS LATER! It's a shame the way television in certain instances chews up careers--well, wait: there's that guy from "Rawhide" who had two movies he directed make the top three on "Ebert & Roeper" (although it was the NY Times guy who was playing Roger Ebert).

I'll always feel dismay about poor Holly from "The Price Is Right." She was the funny, smart, not-as-typically-pretty one that my whole family loved. Then Bob "Disgusting Ogre" Barker kicked her off the show and nobody's seen her since...

Movies though...the woman from "The Day the Earth Stood Still" (was it Patricia Neil?) who was so incredible and just stopped.

I wasn't aware of a TV Superman. I've been listening to the 1930s radio program, and I find it amusing that Superman's flying sound is actually somebody torturing a vacuum cleaner (putting their hand over the hose to block the air and modulate the sucking-sound).

Aren't we lucky? Since we've "never been" we can't have our careers chewed up! Take that, television!

Yeah, it was pretty good, wasn't it?

When I started watching DW it must have been just before Romana showed up (I recall being totally fascinated by the Key to Time idea) - I don't remember seeing anything before that. But I knew about Sarah Jane because she was my mum's favorite (she couldn't stand screamy Jo Grant). Neat to see her back after all these years.

I never saw the original spinoff, where she played second fiddle to K-9, but the credits alone made me blanch.

Also, the moment when SJ's computer is revealed gave me a big flashback to Read All About It.

Amazing! Read All About It! I thought exactly the same thing when we finally saw "Mr. Smith."

You know what they say: you always love the companion you grew up with. I did like Sarah Jane an awful lot but I always thought she was a bit too childlike...Leela the warrior-woman was more my style, and Romana had a cool hautiness to her...all part of the drift away from "screamers & runners" (Jo Grant) to "equally competent" (that's just Rose, I guess).

I agree, Jo Grant bothers me, and not just because of her hairstyle. Try watching her running commentaries, she's lots of fun but hasn't got a brain in her head.

As for the Key to Time, yes, I was so intrigued! They even look good today, though it's obvious to cynical eyes that the "story arc" was poorly shoe-horned in. One of my favourites of all time is still the one about the giant squid sucking people into pipes.

It's also fun to see them ditching K9 whenever possible, though later it stopped being fun and started being psychotic.

I remember drawing pictures of K-9 when I was in grade two. Completely enthralled.

In retrospect, he must have been awful to work with, though: the remote controls apparently interfered with the cameras and vice versa, he got hung up on bits of scenery, and to get a good "two-shot" of him with a person, the actor would end up crouched on the floor all the time.

Speaking of companions, I don't pay much attention to fan-art and such, but this one's worth the click:

Wow, that's AMAZINGLY brilliant. I'd complain that there are no male companions, but the less I see of Adric, the better.

(Side-note: I'm watching the DVD commentaries for the second season, and trying to ignore Julie Gardner's insincere and mindless simpering. During the "School Reunion" commentary, Toby Whitehouse says that things were a little tense before Elizabeth Sladen committed to the episode, since the scripts had already reached the third draft and her participation was 100% necessary. Toby says "We would have had to find another companion for the episode." Somebody else in the commentary says "Adric." There's a long, awkward silence as they all wonder if they should follow up...nobody does).

Special edition drinking game for commentaries: Drink whenever anyone says "How wonderful is _____?" or "Bless."

You're right on about those two, that's for sure.

"This is my FAVOURITE shot."

"I think this is just SUPERB."

Somebody says "We had to make a decision about this scene, but I'm not sure we made the right one." Julie Gardner says "No, I LOVE this, it was the PERFECT choice."

"Can I just say how WONDERFUL it is to be working on this show?"

Somebody says that Doctor Who is special because it's different every week.

Russell T. Davis reveals a bizarre pun or reference hidden in the script that nobody had noticed.

Just some notes on Patricia Neal:

She went on to win an Oscar for "Hud," married Roald Dahl, had a stroke, recovered, and got back into acting again.

The guy who kind of disappeared after "The Day the Earth Stood Still" was Lock Martin, who played Gort. He was incredibly tall, and incredibly weak--Patricia Neal had to be held up on a fork lift when he was supposed to be carrying her.

Aha! I did watch the featurette on the "Day the Earth Stood Still" DVD, but I neglected the commentary.

As for Gort...maybe he was holding out for a sequel? "The Day the Earth Stood Still Again"?