Dunjonquest: The Upper Reaches of Apshai

(See this post for background on what I'm talking about here)

Give some creative and intelligent people a framework for creating games, and before long they'll figure out how to do tricks that are far beyond the original specifications. "Temple of Apshai" may have kept rigidly within the Dunjonquest engine's parameters, but "Upper Reaches of Apshai" has the software jumping through hoops.

Specifically, they've realized three things:
What amazes me about these games is how polished they are. Each time I find that I've missed a room or a treasure, my first thought is that I've encountered a bug, but no...after diligent searching I realize that I didn't find what I was looking for because the level designers wanted me to WORK HARD.

That said, I think there IS a bug in "Olias' Cellar," involving a secret door in room 19 that leads to a corridor section (15) which overlaps another corridor section (20) but shares the same exits. Nothing in the text explains why this happens, so I suspect the design was glitchy and they just left it in.

(I also think there's a missing treasure in the final level of "Curse of Ra," but I'll get to that next time).

Anyway, here are the levels for "The Upper Reaches of Apshai."

Level One: The Innkeeper's Backyard 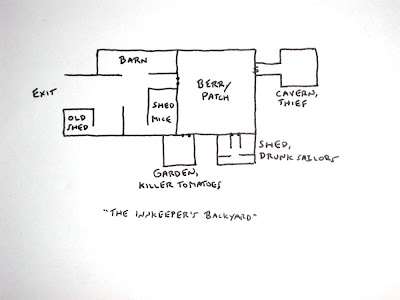 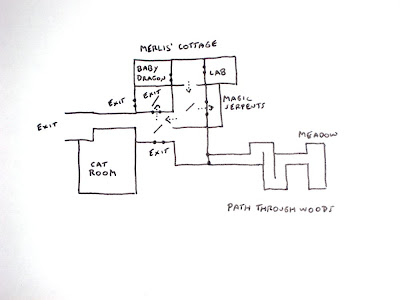 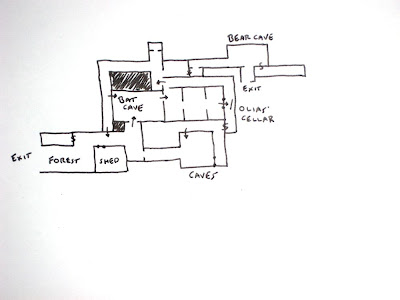 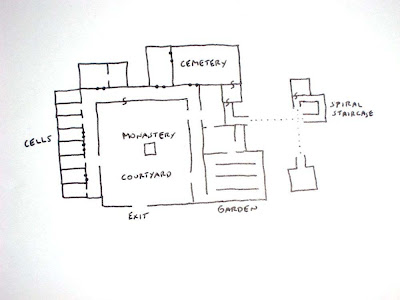 Besides the innovations in the room connections, these levels are more fun to play because they're coherent. They have interesting backstories and little mysteries which go far beyond the "kill monsters and find treasures" plots of "Temple." More importantly, these levels tend to be FUNNY. There are actually JOKES in them. Rather than endlessly fighting motivationless Antmen ("Oh no! Antmen") you are meeting vicious farmyard animals ("Oh no! Goose!") and doing your darnedest to vanquish the Creeping Crud.
Posted by Adam Thornton at 11:07 AM

I would have to see if I can find the original maps somewhere. My friends and I did the expansions (Upper Reaches of Apshai & Curse of Ra). I am not aware of any errors, but we did find out about issues when they started porting the levels over to other platforms (we did them on the TRS-80). It's possible that when I went to fix them that I didn't quite get them all). Nice to see someone who noticed all the fun stuff we did with the engine. All credit to Mark Madrid for figuring out how the engine worked and brainstorming interesting things we could do with it + writing a super level editor.