Regular readers of my more whiny and self-indulgent posts will know that I tore the labrum in my right shoulder last year.

Physiotherapists and sports doctors have assumed that this happened entirely as a fluke, because I'm not exactly the most active person in the world. It's a condition normally seen in baseball pitchers, except that MY restrictions -- inability to touch my back or chest around the middle of my torso, among other places -- are the exact OPPOSITE of the usual "pitcher's shoulder."

I've been on the waiting list for surgery and it will presumably take two more years before I even SEE the specialist, but maybe I can jump the line now, because it's happened to the OTHER shoulder too. The LEFT one. Being unable to do so many things with EITHER of my arms might place me in a new medical category.

There's no way this is simply a "fluke." How did I manage to tear the labrum in both shoulders in exactly the same unusual way?

Over the last few weeks I've formed a hypothesis that I think is a damn good one:
My left shoulder began deteriorating while I was reading William T. Vollmann's 1300-page "Imperial," coinciding with some of the most stressful work weeks I have ever had. I think I'm right in assuming that there's a connection, although I can't find any online correlation between "heavy shoulder bags" and "torn labrums."

This hypothesis occurred to me last week and I've thrown myself into corrective measures. I only carry small books to work, and always on my right shoulder (which is now, paradoxically, the STRONG one). Three times a day I take a break from whatever I'm doing, lie on my back, and do some arm-raising and shoulder-rotating exercises that were approved by my physiotherapist. Then, at my desk, I use six feet of rubber tubing to strengthen my shoulders: I lift, lift, lift, lift.

In addition I've found ways to minimize the little injuries that are caused each day by getting out of bed, putting on clothes, and lifting coffee mugs. On a good day my shoulders don't start aching until noon, and a simple exercise and an ice pack can get them soothed again.

This was going remarkably well until last night's "Pride Prom" show. Here I am just minutes before an endless evening of agony and fear. 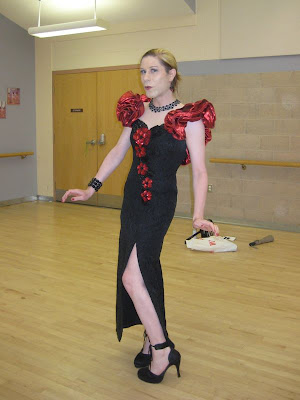 Drag shows are not good for my shoulders because they involve quick-changes and lots of flailing around. Still, over the years, I've trained myself to use my left arm for broad gesticulations and to keep my right arm within the range of motion that it's capable.

But this was the first time I'd done a show with my damaged left arm. After packing myself into the dress in the above picture -- which is now uncomfortably tight because of all those exercises I mentioned -- I performed the extremely demonstrative "Love and Truth" by Mother Mother...and halfway through the number I felt my left shoulder actually TEAR.

I've described this sensation before, but it wasn't the PAIN that made me fearful, it was the realization that -- in a few brief seconds -- I'd potentially caused irreversible damage to my shoulder cartilage. I'd taken another step towards serious physical disability. I don't live with anybody, so there is nobody around to do the things that are difficult for me: what happens if I can no longer change a lightbulb? Sweep the stairs? Dress myself?

The beginning of a drag show is not the time to elicit sympathy and understanding from those around you (though I did try). And now I can tell that the damage wasn't as catastrophic as it seemed: ice packs and a good sleep have reduced the pain and I can still do everything I could do before* (except lower a dress zip, for which I now use a length of fishing line).

There is one thing I DO know: I can't perform in any more drag shows until this problem is fixed, which might be never. They have always taken their toll but this toll is excessive. This isn't much of an issue because I don't do them much these days anyway, but it still makes me sad because there are events I love performing at...the Pride Prom is one of them.

* EDIT: Unfortunately that isn't true...my left shoulder is just restricted in a different way, I think. My right shoulder can't twist inwards in a horizontal way, whereas I think my left won't twist upwards. So much for learning semaphore!
Posted by Adam Thornton at 11:28 AM

You should get a Kindle - much lighter way to carry 100 books around!

This doesn't necessarily mean the end of performing. Some good orthopaedic therapy may restore most of your range of motion.

If, however, you find yourself unable to perform, there may be an emerging generation of talent that can use mentoring.

Don't give in too easily!

Sadly, the books I enjoy never seem to be released on the Kindle! But sooner or later I'll give in.

The orthopaedic therapy helped, but it reached a plateau where only natural healing or surgery could help further, with no guarantees for either.

For now, though, the only kind of drag shows I could do with any confidence would be ones where I never move my arms. And heck, that's like a rock show without distortion pedals!