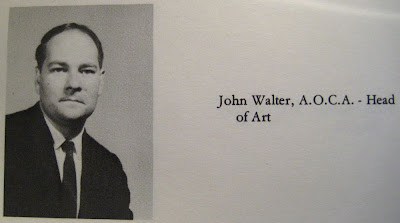 I was surprised to find Doctor John Walter in the 1967 KCI Yearbook. Why? Because he was my art teacher at Waterloo-Oxford in 1989! 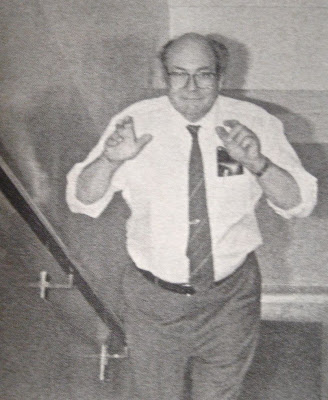 Doc Walter was a very imposing man. It was as though he'd spent his entire teaching career cultivating a massive personality that could crush you in an instant.

This is not idle speculation. One of the first things he taught us was that an artist must be able to stand up to cruel criticism, and to hammer this point home he would put all of our assignments on a table in the class and make us all stand around while he rated them. His ratings went from "excellent" to "crap," and we were forced to watch as our own prominently signed works were arranged in the crap continuum.

I'm not doubting Doc's rationale, but the problem was that not everybody took visual art because they wanted to be artists. Many of us -- me included -- only took it because we were required to take at least two art courses before we could graduate, and our options were visual art, music, or drama. I settled on drama after finding myself in Doc Walter's "crap" pile far too often.

Even so, I loved Doc Walter, and many other students did as well. He was gruff and frightening, but he was also totally honest and he didn't mess around, and I think most of us recognized that he was a talented man and a great teacher.

Anecdote #1: I had his class right after lunch, which was followed by a twenty-minute "reading period." Doc Walter actually USED this time to read, and what's more he would read short sci-fi and horror stories to us. Being an avid reader and a horror fan myself, I absolutely loved this time, and I even loaned him some of my horror collections to use.

I also remember that he allowed our highschool's Dungeons and Dragons club to use his room during lunch, though I don't think he thought much of the game.

Anecdote #2: Some students -- especially those who had trouble with authority figures -- hated Doc Walters. They particularly hated the fact that he insisted everybody call him "Doctor" ("He's not a real doctor!") Rumour has it that he stopped teaching at Waterloo-Oxford after a physical tussle with a student, which I can certainly believe.

Anecdote #3: Several years after graduation, a friend and I actually visited Doc Walter at his house. Doc had recently purchased an Atari computer and we brought some software for him.

I don't know if Doc Walter is still alive, but I'm sure that most students from Waterloo-Oxford who took his classes still remember him. I hope he knows (or knew) that even though the most vocal students found him impossible to deal with, the rest of us thought he was really damn cool.
Posted by Adam Thornton at 7:50 AM

I went to both KCI and W.O. I had Doc Walters and I am almost postive that the confrontation he had was with a (then) friend of mine. Or maybe he there was more than one?
My KCI year book, from 1987(?)is indeed called The Grumbler.
I loved Doc even though I have absolutley ZERO talent. Some of my best memories are from W.O and K.C.I.

Everybody who has contacted me about Doc Walter has said they liked and admired him, so either he was a popular teacher or the people who didn't like him are being kind. :)