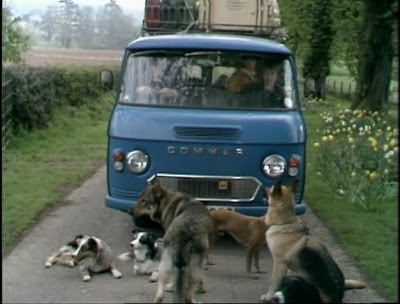 I had extremely low expectations of "Survivors," mainly because it was created by Terry Nation.

I associate Nation with some of the most plodding and formulaic Doctor Who scripts, usually involving some combination of killer virus, invisible monster, deep chasm, and cowardly-character-makes-brave-sacrifice. Nation's hack jobs for Doctor Who were notorious; the show's producers had a running joke about him just selling them the same Dalek script over and over again.

So when I heard that Nation had created a television series about -- you guessed it -- a killer virus, I just HAD to find out how the invisible monster fit in. But I'm sad to say that "Survivors" is anything but formulaic or plodding...in fact, for the first half, it's absolutely brilliant.

These are not your typical Terry Nation characters; they are complex, understated, and always interesting to watch. Sure there's a funny little Welsh tramp that you can laugh at...but then comes episode nine, "Law and Order," which is the first of two truly harrowing treatments of the "survival" theme: what do you do with a funny little Welsh tramp who isn't so funny anymore?

This theme is pretty simple: when almost everybody in the world dies suddenly, and the diverse survivors have to...well, survive...how do they live through the first few days when they can no longer rely on anybody else, let alone the creature comforts they've known since birth? How do they cope with their shock and grief? How do they find each other? What sort of communities can they form, and how do those communities relate to other groups who disagree with their philosophy? Who the hell knows how to make coal, and what will they do when the tea runs out?

That's the basis of season one, but it's so much more than that, because all of this is approached in a quiet way: no music, no big moments, no flash or spectacle. By contrasting the 1975 series with the new 2008 remake, the Outland Institute explains what is so wonderful and refreshing about this approach, compared to the way it would be (and is) done today. The 1975 series is has an almost documentary style, complete with atmospheric filmed outdoor footage.

Until halfway through the season, however, when things go downhill a bit. First of all, this was the transition period when the BBC was switching from film to "O.B." for their program inserts, and the outdoors look far less "real" when they start using videotape.

This is made worse by the simultaneous arrival (in episode seven) of Hana Maria Pravda, a woman who stands out from the otherwise excellent cast by turning all of her scenes into overwrought babooshka-stereotype cartoons. Combine her with the quietest bunch of cheerfully-prancing "feral dogs" -- especially in one scene when she must actually be ATTACKED by them -- and you get the first glimmers that things are going downhill.

And they do. The plots become more heavy-handed and deliberate, each episode involving the destruction of yet another hard-won and essential social advancement due to the stupidity of others, often the stupidity of the children whose sole purpose is Get Into Trouble or Get Others Into Trouble.

I also have to mention what I refer to as "The Tritovore Technique" (using convenient accidents to get rid of characters who would be too burdensome to keep around) and "The Lucy Saxon Technique" (using secondary characters to kill villains because the primary characters are too principled to do it themselves), which become more and more obvious as the show goes on.

I thought I'd give up after watching the first season, but the second season -- following a truly ridiculous Tritovore-style character-purge of last-season's dross -- has introduced Ruth, a character who harkens back to the complicated and interesting survivors of old. And the second story of the season ("Greater Love") is, once again, unpredictable and beautiful and terrible.

Here's to Ruth and Jenny and Greg and the rest of the survivors. May their wheat ripen, may their sheep multiply, may their babies survive and their horses never go lame. And may they never suffer the indignity of a crappy remake.