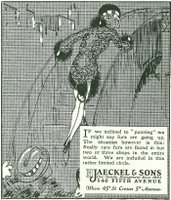 Thanks to Vanilla I am working my way through "The Complete New Yorker." Since it was a "smug bon mot" magazine in its early days, I generally find the advertisements more interesting than the latest snuffy gag about prohibition and debutantes and Yale football.

I've started to become aware of these CREEPY ads from H. Jaeckel & Sons, furriers. Besides having the lighting and mood of a 1920s Tod Browning film, they also tell the ongoing cheerful story of a woman (in a fur coat) who is being stalked by a man (who is also in a fur coat). What's even more strange is that the write-ups are only tangentially related to the disturbing images, as though the IMAGES were the real point and the ADVERTISEMENTS only an after-thought.

If we inclined to "punning" we might say furs are going up. The situation however is this: Really rare furs are found in two or three shops in the entire world. We are included in this rather limited circle. 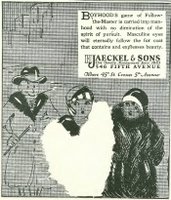 Then there's this one from October 23, 1926, in which two young ladies are being followed by American Psycho:

Boyhood's game of Follow-the-Master is carried into manhood with no dimunition of the spirit of pursuit. Masculine eyes will eternally follow the fur coat that contains and expresses beauty.

It's a no-brainer to say that "following women" had different social connotations eighty years ago. Even so, the first advert made me think "hmmm, that's strange." The second advert made me think that H. Jaeckel & Sons had an unsavoury fetish.
Posted by Adam Thornton at 9:42 AM

Fashion has taught me how the 'the man' keeps it all in check:
1) preditory stalking should be taken as a compliment - you're too sexy!
2) abstaninng from eating to an uncomfortably low body weight is sexy
3) spending all your time (& $) on the superficial keeps you from competing with men, and that's sexy!
You know, nothing is more important that being sexy. It's comforting to know that advertisers knew way back then how to confirm our womanhood. Like wearing fur on our backs, but shaving it off our poh-nah-nahs.

Don't worry though, Vanilla! Women eventually win...when they reach 35 they don't have to worry about that stuff anymore...because THEY BECOME OLD HAGS! They can even let their poh-nah-nah grow out. Tell me that isn't freedom!