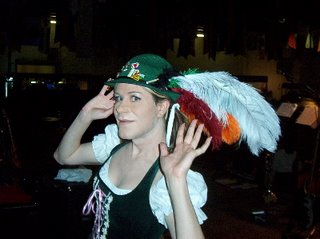 I've lived in the Kitchener/Waterloo area all my life, and I'm German. So why have I never gone Oktoberfesting before?

Mainly because, in K/W, you don't need to actually GO to Oktoberfest in order to suffer the fallout. All you need to do is (for instance) take a bus or work in a donut shop during the weekly festival and you'll experience more Ein Prosit shenanigans than you can handle.

Basically, Oktoberfest is a giant piss-up with a thin veneer of culture. A VERY thin veneer. It's not about Germany any more than French Fries are about France. And the stuffy side of Muffy is bound to see that as a negative thing.

But this year I was asked to be the DJ for "Pridetoberfest," the first gay-friendly Oktoberfest event in the history of...well, history. Expecting a cozy little event (and treasuring any opportunity to see the priveleged back rooms of a large building), I agreed.

What I wasn't prepared for was the absolute HUGENESS of Oktoberfest, in both a physical and institutional sense. The fest hall (at the Kitchener Auditorium) was a full-sized arena. Despite the valiant work of the savvy decorators there was no disguising the esentially functional aspect of the event: row upon row of tables to sit and drink at, an enormous dancefloor that I generally managed to fill up, and an assembly line of beer and schnapps and heavy German food that you'd have to be crazy to eat in such an environment.

Keep in mind that this is a totally rectangular place with a concrete floor, cinder-block walls, and fifty-foot steel ceilings, so the message is clear: you're not here to relax and cozy up with a few friends, you're here to get down to business...and the business is rubbing shoulders with your neighbours, drinking too much, eating too much, vomiting, and not worrying about the vomit because there's nothing for it to soak into except other people's clothes (and they'll never know the difference between your vomit and theirs anyway).

I'm speaking from heresay, though. Last night's crowd was pretty sedate and even though there were about 850 people they were somewhat dwarfed by the hugeness of the place. The crowd was a mixed bunch, some of them from Toronto who had heard about the event at this year's Toronto Pride, lots of people from the local scene, and a fair number of straight folk who will probably go to any Oktoberfest event regardless of the theme. It's such a TRADITION. It's RITUALIZED. People who would never even THINK about doing the Polka at home were Polka-ing along with the house band (The Saxons) and doing an incredible job of it.

The other part of the overwhelming tradition is the network of volunteers who staff these things. I only caught a bare glimpse of the complexities of the organization, but it seems that lots of local charities staff these events every year, and EVERYBODY knows EVERYBODY. It was heartening to see so much volunteer work, especially since my own regular volunteering (at the Kitchener/Waterloo Hospital) tended to involve frustration, disillusionment, and my running away as fast as possible from my fellow volunteers.

Speaking of which...well, a DJ can't make everyone happy. People will always bitch (and rightly so) but it's always sad to be criticized by anybody when you're quite frankly doing the best you can possibly do. I don't know how vocal the criticism was, but at least a few people felt that the music wasn't "gay enough."

This raises a very interesting point. When I started DJ'ing a retro night at Club Renaissance (the local gay bar) I came armed with what I considered to be stereotypical "gay music"...happy disco and electro-pop. But I quickly learned that the local gay crowd -- as a whole -- did not respond half as well to that stuff as they did to classic rock. I get the feeling that if Marc Almond, Jimmy Sommerville, and Alison Moyet walked into Club Ren nobody would care...but Jon Bon Jovi would be MOBBED.

The two women who brought this complaint directly to me were very pleasant, but I couldn't help feeling that they were categorizing the crowd in a way that was largely divorced from reality. They said that "gay music" should be played at a gay event and that too many straight people were dancing, which seemed to ignore the fact that the dancefloor was essentially mixed -- and full of happy people. Their suggestion? Melissa Etheridge and April Wine. Sadly if I'm going to try to get 850 people dancing I'm going to pick Def Leppard over Melissa Etheridge anyday, basically because I don't want to see 825 people walk out the door.

I mentioned this incident to somebody else and she expressed amazement that I hadn't played "YMCA." And I was like, holy cow! Is "YMCA" considered "gay music" these days, or is it considered embarassing and condescending kitsch with unpleasant political baggage? If forced to put "YMCA" into the gay or straight music category, I'd put it firmly into "straight party music" nowadays.

So I guess my whole conflict is that there are two interpretations of "gay music." One is "music stereotypically considered to be gay." The other is "music that gay people like." And since that second category encompasses pretty much every type of music (depending on the region and the individual), I just am not comfortable with the former category.

I've spent most time talking about this little "gay music" incident because it's the one that made me think me the most, but it was really a small part of an otherwise wonderful evening. I met a lot of super-happy people. I saw some folks I haven't seen in a long time. I chatted with the president of Oktoberfest (nervous) and this year's Miss Oktoberfest (exhausted). And I expect that next year's "Pridetoberfest" will be a bigger success, since this one worked out so well. Are you coming?

I'll be there! Now that Dave Watt has forced me into my first Oktoberfest hat (see above) I have no excuse. I'm no longer an Oktoberfest virgin.
Posted by Adam Thornton at 12:45 PM