While tracing the American fixation with everything "modern" during the first half of the century, Lienhard lets drop tidbits about inventions and concepts that flourished but failed, either because they were supplanted by new technologies -- cattle drives, the Pony Express -- or because they turned out to be very, very dangerous.

These stories make me sit up and say "holy cow!" Maybe he didn't intend to write a book of nifty factoids, but I sure am saying "holy cow!" a lot. 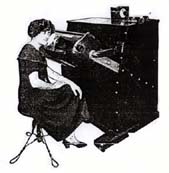 Apparently everybody was ga-ga about X-rays at the turn of the century, in the same way they would be ga-ga about atomic energy before VJ-Day. These X-rays could SEE THROUGH stuff! A doctor could look at the inside of your body...without opening it up first!

This was a miracle, but people just had no idea how dangerous X-rays were. We sometimes hear about the X-ray machines that children utilized to make sure their shoes fit in shoe stores, but I've never before heard of...THE TRICHO.

We all know that large doses of radiation will make your hair fall out. So why not use it as a method of hair removal? From the '20s to the mid-'40s, women went for multiple sessions at the Tricho machine. They'd sit with their chins up against X-ray emitters and get bombarded with radiation for four minutes at a time.

Their facial hair fell out, of course...but, as one website puts it:

...[it] also eventually resulted in wrinkling, atrophy, white or brown fibrous splotches, keratoses, ulcerations, carcinoma, and death for many clients.

Even after the dangers became known and the government shut down the machines, women continued to go to secret Tricho clinics...it was so effective they didn't seem to care that they'd be disfigured in 3 or 4 years. And what's more, people just loved X-rays because they were so scientific and modern.

That didn't stop them from dying, however. Apprently:

By 1970, one study estimated that over one-third of all radiation-induced cancer in women over a 46-year period could be traced to x-ray hair removal.

What eventually stopped the fad? According to doctors who coined the term "American Hiroshima Maiden Syndrome," women were turned off the Tricho by grotesque images of atom bomb survivors. Suddenly radiation wasn't so harmless anymore. So another science fad bit the dust.

The most comprehensive Tricho page I've found online is at the Museum of Questionable Medical Devices...just in case you want to learn more.
Posted by Adam Thornton at 8:54 PM

There are no limits that women will go to achieve beauty. It's where our value lay. Even on Dr. Phil yesterday (!, explain later), the show was openly criticising the fashionableness of ultra-thin models. Dr. Phil claimed to support healthier images of women, while still commenting "some of those skinny models are just blessed with high metabolism". So, the "high metabolism" look (or prepubescent look)is still being idealized, while still paying lip service to healthy imagery. Whatever. B-T-W, I'm going to spend hundreds of dollars to have my ever so slight mustache burnt off my face with lasers. Wish me luck!

You MUST explain what you were doing watching Dr. Phil. Was it because of his "understanding eyes?"

At least we're pretty sure that laser hair treatment doesn't make your face fall off.

makes me want to douche with lysol

Oh geez, you will, and then I'll be sued for encouraging you.

what about a lysol enema?