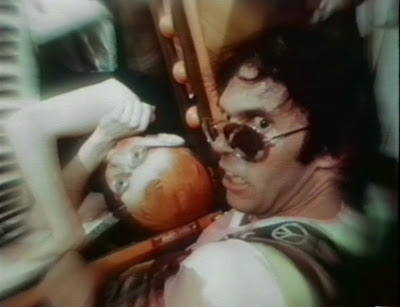 I've never thought much about Neil Young. My parents owned some of his early albums and I was friends with an obsessive Young-ophile, but he only entered my consciousness when he did something brilliant, weird, or stupid.

A guy named R. loaned me Neil Young's "Human Highway" DVD, which I was anxious to see because of its colourful reputation and its high Devo-goodness conent. The movie, true to form, is a cynical, stoned-out, incomprehensible mess...but it captivates somehow, like an exotic and somewhat scary child's toy.

I also found myself liking Young's music in the film, which was largely pulled from his equally infamous vocoder-dominated album "Trans." I asked R. if I could borrow the album. Typically, R. gave me a DVD containing Young's entire music catalog from 1963 to 2006. And I can't possess an exhaustive catalog without listening to it all.

So I'm working my way through Neil Young's music, from beginning ("The Mynah Birds") to the end (so far). Sometimes I think he's one of the best songwriters around, and sometimes I think he writes like somebody who couldn't care less. I love his crunchy Crazy Horse stuff and I'm less enamored with his sort of whiny, over-serious folk material. I remember how gratifying it was to see decrepit, ugly Neil kicking Pearl Jam's butt during the MTV Music Video awards many years ago. The guy can really play guitar. Eddie Vedder bothers me.

I can't see myself going on a massive music-buying spree here, but my respect for Neil Young has gone up significantly. And he mixes with Devo better than you'd ever imagine.

PS: I agonized over whether to add a "Canadiana" tag to this post. We treat Neil Young like a native son when he succeeds, and we deride him as an American sell-out when he embarasses us. I doubt that Young himself considers himself to be a Canadian after all these years...so no tag for you, Mr. Yankee.
Posted by Adam Thornton at 1:26 PM

Some happy bloviations inspired by the relatively painless (for once) root-canal I underwent this afternoon:

*I first heard Young when he was with Buffalo Springfield, a band that had too much talent to exist for long. Young and Stephen Stills at the time were at about the same level as guitar players, and when they dueled during live sets (especially later with CSN&Y--I saw them live), the "jamming" became endurable, even enjoyable.

Even then Young had the furry, staccato, stuttering rock side, which also successfully incorporated Eastern elements, and the warm, fuzzy, folksy side: "Mr. Soul" vs. "I Am a Child." But then there were the glorious, unclassifiable anomalies like "Broken Arrow."

(Looking for Springfield performances on You Tube, I came across one on "Hollywood Palace" where they performed parts of "For What It's Worth"--natch--and "Mr. Soul," with Neil in his long-fringed buckskin. The hoot is they're introduced by Tony Martin--remember "Tenement Symphony"? What a hack--but he was married to Alice Faye and Cyd Charisse, the dog.)

*Young's first four solo albums are marvelous, especially "Everybody Knows This is Nowhere," the first one with Crazy Horse, and "After the Gold Rush." "Cinnamon Girl," "Tell Me Why," "When You Dance You Can Really Love"--they're special to me.

*In general, I agree with you--I like Neil the rocker better than the balladeer. After reading your post yesterday, I put on the DVD of "Rust Never Sleeps" and watched part of the electric set. Tidal ragas.

*What other Sixties rocker can point to two relatively recent concert/documentaries about him--one by Jim Jarmusch and the other by Jonathan Demme?

(And Mr. Vetter is a pest--it looks like he tried to be adopted by Pete Townshend at one point, and he's on the new Stones concert DVD.)

Ah, "Broken Arrow!" You can pretty much chart the drugs that Neil Young was taking throughout his career. Those must have been the hallucinogens.

Currently, "On the Beach" is my favourite, and the only album that I've liked all the way through. Apparently it's the most listenable one from the "Ditch trilogy."