Some days, to pass the time, I read back issues of '80s computer magazines. It's a nerdy pursuit but sometimes I run across something interesting.

Then there was Crash.

Published in England and devoted to the ZX Spectrum, Crash Magazine was a swill of pre-adolescent humour, faux hipness, and over-the-top gore. Add Oliver Frey's strangely homoerotic cover art and you have an untinted window into the minds of repressed British childhood during the middle '80s. It's boring and annoying and repetative, yes, but it's a type of sensationalistic weirdness that I've never been exposed to before.

"Tip pages" were very popular in these magazines. Readers would write in with advice for beating the games, or programming cheats, or maps of the sprawling levels which typified Spectrum games. Crash's tip page was nothing special until -- in 1986 -- the previous tip page compiler stepped aside and he was replaced with...A GIRL!

Hannah Smith's hiring was presented initially as some form of female emancipation: women could be smart and clever and competitive just like men! But some of the spotty readers wrote in to say typical '80s things like "Women should go back to where they belong and stop taking men's jobs," as though being the self-styled "girlie tipster" for Crash Magazine was a high-paying position of executive power.

What's most bizarre, however -- and what, in retrospect, was very typical of the '80s reaction to female empowerment -- was how other readers (and the editors) would simultaneously defend and DEGRADE women. All the male readers said things like "Get out of your chauvinist caves, you idiots! This is the '80s! Hannah Smith is great and she's GORGEOUS! Please give her my PHONE NUMBER!" The female readers said "Just because we're weak and frilly doesn't mean we can't do a man's job!" And the editors... 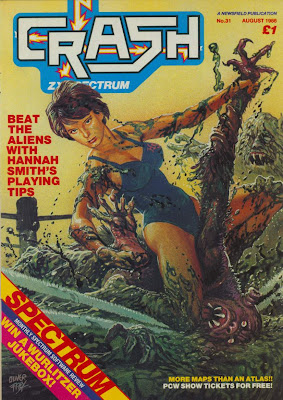 ...and they wrote articles about how sweaty she got during aerobics, and they tried to set up a jello-wrestling contest with another female writer...

...all while defending her right to be a member of the team.

I'm not saying that England was particularly sexist at the time -- they had Benny Hill, sure, but they also had Margaret Thatcher. Reading these magazines, I'm remembering that this was how female emancipation was treated by the average person in the mid '80s: "Sure women should have the freedom to do whatever they want...as long as they do it in my pants!" There are still lots of people who have that attitude, surely, but you don't see NEARLY so many of them, and they CERTAINLY don't have a mainstream high-profile forum for their views (not without being viewed as crackpots, at least).

This leads me to Benny Hill. I've been watching his 1982 specials today and comparing them to both his older '60s programs and to today's television shows. They're creepy because Hill had gotten older while his female talent got younger (and more scantily clad), and 95% of the jokes involved Hill and his cronies trying to squeeze some woman's bum...

What's my point? I only have an inkling of one. It seems to me that as sexualized and marginalized as the Hill's Angels and Hannah Smiths were, they DID embody a sort of privilege and power as long as they remained at arm's length. By being intelligent and beautiful they had control of the scripted, imaginary situations they were put in. They were very much the superwomen...fetishized goddesses on pedestals.

When I do drag I'm very aware of this aspect of idealized femininity, so I see the attraction to it, and I also see the benefit of it...

...but it all DOES fall apart when reality enters the picture. The average woman on the street is NOT one of Hill's Angels, and NO women live inside his television scripts. The REAL world is a dangerous place for the desired female, and its one where that element of sexual power tends to wane as the years go by.

So it's certainly good that today's Hannah Smiths are not so routinely dismissed as "girlie tipsters" (though it does seem to me that many women would embrace that type of diminutive for themselves). Things have certainly changed publicly, and that's a good thing.

As for the rest of it, though...gender, sexuality, society, and politics are a terrible stew.
Posted by Adam Thornton at 8:23 PM