A New Gesture of Extreme Consternation

I'm particularly fascinated by "gestures of extreme consternation." Previously, my favourite gesture of this type was to be seen only in Bollywood movies, when the heroine accidentally hits the hero on the head with a kitchen utensil; instead of putting her hands to her face and saying "Oh NO!" the way our western sitcom characters would, the Bollywood female would raise her hands to shoulder-level and flap them forwards and backwards quickly, like she were putting out a shoulder pad fire.

While watching Benny Hill this week I discovered an entirely new gesture of extreme consternation, one that I think was uniquely British: when Benny Hill does something cruel to you in a restaurant, put one hand on the top of your head, stick the thumb of your other hand in your mouth, and then moan terribly while stroking your nose: 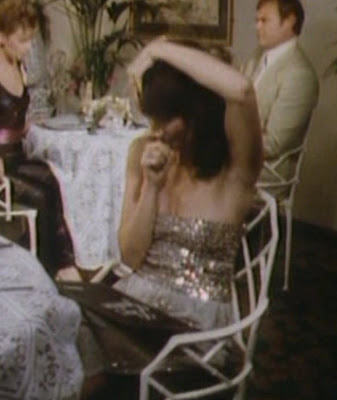 I'm not kidding. That's Louise English in the picture, doing the most exaggerated version of this gesture that I've seen so far (usually the "hand on the head" element is not included).

What is this supposed to mean? I think it means "I am so shocked and upset that I've reverted to infancy!" But it's presented in such a nonchalant way that I suspect this wasn't just part of Benny Hill's show...I think it might have happened in British screwball comedies in general. But the first time *I* saw this I sat up in my chair and said "What the HECK?!?"

Somehow I can't bring myself to watch a "Carry On" movie in order to do more research.
Posted by Adam Thornton at 8:44 PM