This is My Humerus

People are always showing ultrasounds of their babies to suitably impressed friends and family. Instead of showing you an image of my life and happiness, I present you with an image of pain and dysfunction...yes, this is what my shoulder looks like on the inside: 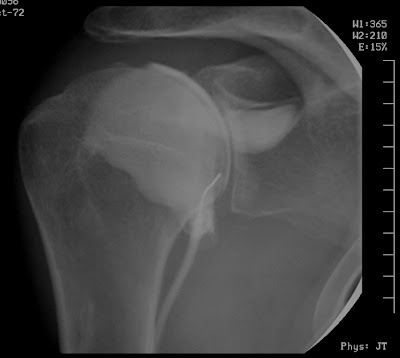 I'm no doctor so I can't tell you what it means. All I know is, if the inside of your shoulder looks like this, your shoulder is F*CKED.

Today I went to the Guelph General Hospital to pick up a disk of my MRI results, partly because I'll need to give them to a shoulder specialist but also because I'm really darn curious. What sort of awful thing did they see when they looked at my cartilage in three dimensions? Did they scream? Do they still have nightmares?

Probably not. All I know is that once you view your body "in slices" like this, you cease to recognize it and you realize just how meaty you are. The only landmarks I can find in the images are the bones; everything else is just so much generalized gristle.

I'll let the doctor figure it out.

In the meantime, you might be wondering how to look at the inside of your OWN body. First you need to get an MRI, and then you need to call the hospital and ask them to make a copy of the data. They won't mail it to you (or your doctor) so you need to drive back to the hospital in a pounding rainstorm in order to pick up the CD.

When you examine the CD itself, you'll discover that it contains quaint Microsoft DOS files with eight-letter all-caps filenames. The included viewer cannot be run on your Mac, so either you spend the rest of your life trying to interpret the hexadecimal data in your "DICOM image" files or you download OsiriX, a free DICOM viewer for the Mac.

When you use a layperson-monkey technique of hitting OsiriX buttons semi-intelligently until something appears...well, unless you have a railroad spike through the affected organ or something inside you has exploded, you'll see animated slices of incomprehensible things which look mostly like a Grateful Dead lightshow.

I'm not saying that it isn't worth it, but if I thought I could diagnose my own injury by looking at these pictures I was terribly terribly wrong.

PS: On second viewing I believe that the big white thing in the picture -- the one on the left, partly overlapping the ball of my humerus -- is the oft-cursed "labrum," which in my case is apparently torn. It shows up so well in the picture because they injected radioactive dye into it. If that's the case, it's sort of neat that you can see it right through the bone.

PPS: The picture above is not from the MRI, it is an X-Ray they took immediately after the dye was injected. I think the wormy-looking white line in the middle is the path of the needle with some dye backed up into it. Yuck.
Posted by Adam Thornton at 7:12 PM

I had the same kind of experience when I picked up, then looked at, a relative's brain MRI.

I thought I would know what I was looking at. I didn't. I needed the radiologist's report and impressions.

Even so, it was fascinating in a macabre way - this was a relative, not some anonymous stranger.

Puts a new, 21st century twist on "getting into someone's head."

I suppose this is why the radiologists get the big money, and why we can't start a "Cheap MRI Interpretation" service.

"This thing is a bone, which means you have a bone there. This other stuff isn't bone and this black spot is something that could be natural, or maybe evil."