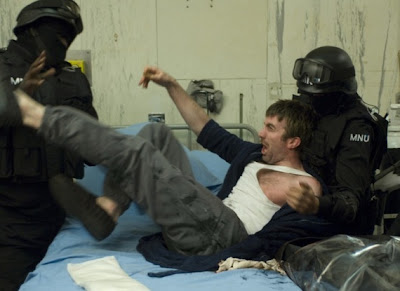 This first manifested as a paunchy sadness. My doctor, instead of giving me Milk of Magnesia and a poultice for my bedsores, hit me on the head and wrapped me in a bag, and the next thing I knew I was in Peter Jackson's torture chamber, screaming.

"I have an idea for a blockbuster movie, but I'm unable to to nail it down, you see," said Mr. Jackson, reclining on a settee with his hairy feet sticking out. "I have stolen a disused Hollywood Scriptwriter's Typewriter from George Lucas' secret museum, but neither my Faceless Spouse nor I can make it operate." And there I saw the Faceless Spouse herself, gnashing and twisting.

Mr. Jackson applauded. "That's excellent! Your transformation into a Hollywood Scriptwriter is almost complete! We need you to operate the Hollywood Scriptwriter's Typewriter in order to ensure the success of our new movie. We want it to be about rampaging aliens that get all shot up. Other than this we do not know."

"I WILL NOT COOPERATE!" I shouted, but when Peter Jackson shocked me with an energy weapon attached to his belly, I told him that he needed to write a socially-relevant story with a strong character arc.

"Social commentary can be complicated and taxing to the audience," said Peter Jackson.

"Not if there are enough guns," I explained patiently, and both Peter and his Faceless Spouse applauded.

"We'll say it's all very maverick and visionary, and not a Hollywood action film at all!" said Peter, laughing. "If anybody gets bored, we'll say it's simply entertainment and not a social commentary!" His Faceless Spouse seemed to enjoy Peter's joke, and as a reward she shambled forth to push gruel into his wet, questing maw. This, I saw, was the source of their twisted bond: the gruel with flecks of meat, the laughing faces, the cynical horror.

Suddenly contemplative, Mr. Jackson stopped eating and pushed his Faceless Spouse aside. "But wait. I can't think of a single socially-relevant topic that hasn't been explored ad-nauseum."

"Is that good or bad?" asked Peter, and after a few additional shocks due to my predictable non-compliance, I typed out the first draft of a movie which would explain to viewers that xenophobic discrimination is both bad and pervasive. After reading it, Peter put down the script and said "That's really enlightening," and his Faceless Spouse gibbered mindlessly as though hungry for sex.

"But..." said Peter, turning over slightly like a sleek and largely immobile seal, revealing the engorged suckers which hung from his buttocks. "But...if we're going to convince the audience of such an audacious moral idea, we need to make them CARE about the goopy aliens. They must feel EMPATHY. Here's my guy from Weta Digital," and for the next three hours I endured a featurette about the design and implementation of the alien creatures. "After we film the man in the green suit, we digitally erase the wires and begin the sound design," said the guy from Weta Digital.

"STOP IT!" I screamed. "DETACH ME FROM THIS MACHINE! SHUT HIM UP!"

"Not until you give us a hook to hang the audience's sympathy on."

"LET ME GO! YOU CANNOT DO THIS! THERE ARE LAWS!"

"Not in Middle Earth," he snarled, and he barraged me with electrical zaps from his bellygun. "Give us what we want or I'll blast your stinking willawalla to the billabong!"

"DESIGN A CUTE ALIEN BABY WITH WET EYES!" I screamed, and then everybody exploded, and now Peter Jackson is rich, and I'm just sitting around and folding these fucking flowers.
Posted by Adam Thornton at 7:22 PM

Again, why aren't you writing novels?

Lack of focus and discipline! :)