The Drys Go Happily to Hell, Plus Cat Joke

In March, 1930, after ten years of expensive prohibition "enforcement" that did little except make bootleggers rich, Americans loudly debated whether to reform the Volstead act. It was obvious that people of all social stripes were still drinking almost as much booze as they had been previously, and it was obvious to most people that prohibition encouraged outright graft and corruption to the point where people just assumed that every cop (and government official) was on the payroll of crime syndicates.

But still the "Drys" held on. Powerful voting blocs had not yet reached the point of "repeal," simply asking for "reform." Magazines like The New Yorker had a field day with this whole debate, as often happens when opposing views become totally strident, polarized, pointless, and out of touch with reality.

So March 29, 1930 brings the first really great New Yorker cover that I've seen so far, drawn by Rea Irvin, probably the most constant contributor to the magazine since its inception. Just look at the happy grin of the "Wet" good-time girl falling to hell, and the awful drabness of the "Dry." 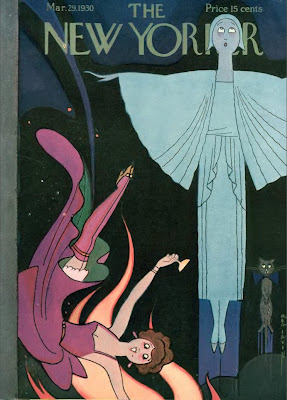 I'm confused about the cat, though. Was this from some temperance meme of the day, or was the "Dry" a caricature of a notable cat-loving person, or did Irvin add it simply to add balance and humour to the cover?

We'll never know, but I DID find this great cat joke:

Amie Semple McPherson was an old time evangelist who was known for her dramatic sermons. Once she sent a little kid up into the choir loft and told him to release a dove out of its cage on cue.

So she was preaching away and said, "And the Lord will send a dove of peace..."

And the kid yelled out, "The cat just ate the dove. Should I throw down the cat?"

Posted by Adam Thornton at 8:03 AM

Not only happier, but better dressed. And just check out those gams!

Oh sure, those stems go ALL the way to the ground!