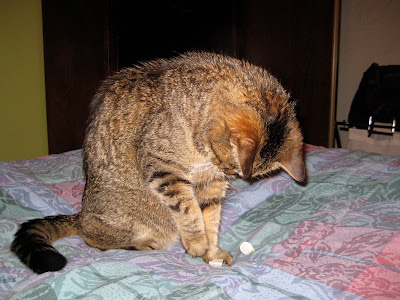 Every day for the last year I've come home expecting to find Zsa Zsa either dead or dying. During that time she has gotten terribly skinny and bowlegged, and her posture has changed and she's not as concerned with personal hygiene as she used to be, but otherwise she's exactly the same cat. Which is weird!

She still yowls for food and for the privelege of sitting on the patio (or, at the moment, stepping onto the patio and saying "Oh wait a second, never mind"). She climbs up and down the stairs with no problem at all. She jumps from my armchair to my bed -- a seemingly impossible task -- without batting a whisker. And at every opportunity she snuggles up to me and purrs and purrs and purrs.

She has even developed a new vocalization ("Eeeow, yow, yow!") which means "I want to play!" Seriously, this arthritic and organ-failed cat loves to jump up on my bed -- always the bed -- to play the two games that still tantalize her: "Catch the feathered toy when it scoots past you" and "Stomp on the pen-tip papers when I flick them at you." She's playing the second game in the picture above.

After she soaked the basement carpet with urine, however, it was obvious that something needed correcting. So I cut the carpet into pieces and removed it under cover of darkness and I bought her a second litterbox, one with tall sides. I also removed the hood, and put one of those doggie pee-pads around it (thanks, Lydia!)

This has worked. She's stopped using the old litterbox almost entirely. I think she still TRIES to pee outside of it, but the edges are high enough to block the stream. I also bought her a cat water-fountain (her FOURTH) which seems to have improved her life immensely.

Getting her to eat can be a hassle. She used to be the least finicky cat in the world, but I think that food is less interesting to her than it used to be, and maybe it makes her a little sick. The vet prescribed Azodyl to supposedly remove some of her uremic toxins, but it's difficult to know if it's working.

Most strange is the way that our relationship has changed. For nine years she was a roommate who needed very little attention or upkeep, whereas now she relies on me constantly. I have discovered that if I interact with her through the day -- pick her up and let her look out the windows, play with her, put her on my lap, talk to her -- she becomes far perkier (and hungrier) than on those days when I'm distracted and selfish. It's to the point -- and has been for almost a year now -- that I'm afraid to leave her alone for an entire day, in case she might just give up.

So Zsa Zsa, now, is a surprisingly capable invalid. I'm hoping she lasts until the spring at least, so she can finally enjoy the patio at its best. I'm also hoping she dies when it's warm so I can bury her in the garden that she loves to play in.

But the way things are going, she'll outlast me!
Posted by Adam Thornton at 9:49 AM

I don't know if Zsa Zsa made it to the spring (couldn't find more recent posts based on the tags), but this just made me smile... My cat, Bobby (named pre-me), is a 20-year-old gentleman and has so much in common with Zsa Zsa -- right down to the sudden constant needing of attention (a few years ago). He's having constipation problems these days that have not responded to lactulose, a high fiber diet, or tonic-lax. Not sure what's next, but it's always comforting to read other people's cat stories and see he's not so different... he's just very very old.

Yes, sounds like we're in the same boat! Zsa Zsa has indeed mad it to the spring and is exactly the same as before, just old.