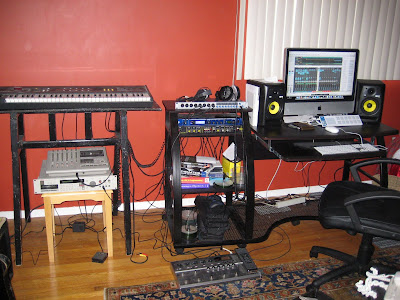 Ladies and gentlemen, it's the newly-updated and fully-equipped Barracks Home Studio.

I've splurged a bit during the last few weeks. Errrr, actually, I've splurged quite a lot. My desire to raise my setup to the next level -- a level capable of semi-pro mastering -- has opened the floodgates in a terrifying way: when you find out how little you know, you also find out how much more you NEED.

But my mixing and mastering quest will be detailed in another post. For now, this is where my studio stands today. And like an egocentric goof I'm going to tell you what's inside, in order of when it was acquired (more or less).

How does all this fit together? Basically I use Logic Pro as the central hub, with the Firestudio Project as a router for all my effects, external equipment, and monitoring options. It's a beastly patchwork of equipment but it all fits together now, and my hope is that I can finally CRAFT some music instead of simply hacking away at it.

Several projects are on the go, including a few collaborations that are far outside my comfort zone. More on that soon!
Posted by Adam Thornton at 8:06 PM

Email ThisBlogThis!Share to TwitterShare to FacebookShare to Pinterest
Labels: coming up, computers, electronics, The Barracks, UPhold