Fireman, Save My Chop! 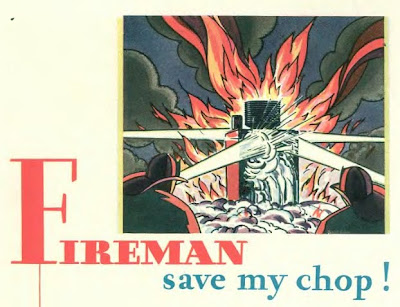 Yes, this General Electric advertisement on the back page of the September 20, 1930 New Yorker is...baffling. I can only print it in full.

Don't worry, lady. You'll find that chop as fresh as on the day it roamed the fields of Iowa. Ain't this a General Electric Refrigerator?

Don't ask silly questions, lady. Sure it's a General Electric -- can't you see the Monitor Top? In the Monitor Top, the nonchalant motor of this astonishing Refrigerator is doubtless idling with its feet perched atop its desk--totally oblivious to the muffled epithets of the perspiring fire department.

Lady--in ten or fifteen hours, when the noble fire brigade has succeeded in drenching the entire back cover of the New Yorker with half of Croton Reservoir, these gallant fire-fighters will open the regrigerator door, and--as is the custom of gallant fire-fighters--they'll "take a little peep inside."

They wouldn't blink an eyelash--since this refrigerator is General Electric--if they found a huddle of sleepy penguins roosting on the topmost shelves. And ice cubes frozen solid--with a happy band of baby walri (walruses) frisking in their midst.

No, lady--it takes more than a mere conflagration to fluster a chop in a General Electric Refrigerator. That's one reason why we think you'd like to own one. You don't like your chops flustered--do you?

Besides employing the flippant, slangy tone that I'm increasingly seeing in advertisements of this era, what the hell is the point of all this? Are they saying that GE fridges will keep their contents cool even when the temperature outside is hot? Are they actually implying that said fridge will survive an apartment fire?

Heck, those things WERE built like tanks, but I'd think at least the Monitor Top (whose motor apparently has FEET) would melt into a puddle of toxic goo.

PS: A possible explanation. It's obvious this was written specifically for The New Yorker. Maybe it's a clumsy attempt at exploiting some of the recent themes in the magazine? Several months earlier The New Yorker had printed a long serialized feature about the history of firefighting in New York; the rivalries, the technology, the ubiquitous Croton Reservoir.

I wonder if GE made it a habit to scour the pages of the magazines they advertised in, then write tailor-made copy about whatever they found.

Posted by Adam Thornton at 7:05 AM

To a small degree (no pun intended), a well-build refrigerator might insulate its contents from a fire (but it's no substitute for a record safe designed to protect papers for 1-2 hours).

The ad copy is overly long and silly. Since when do firefighters peek inside refrigerators (except to rescue the penguins)?

I'll keep an eye on the subsequent GE advertisements. If my hunch is correct then they will somehow be able to tie in backgammon.