They Gave a New Thrill -- That's Why They Got There....So Quickly

During 1930, the cigarette manufacturers continue to aim their advertisements at the Gay Young Things. It was a market that Murad had long courted (by 1930 they were in the midst of a long and tiresome pidgin-French campaign), Lucky Strikes had graduated from flippant "Happy Go-Luckies" to paranoia about weight (a reaction to a candy manufacturer's campaign that told readers to eat candy instead of smoke), and Spud was still hammering the "Smoke a Spud When You're Freaking Out" storyline (after briefly flirting with bogus science).

What about Old Gold? Last time I mentioned them in this blog they were in the midst of a rickety vaudeville promotion, and since then they've continued with the "Not a Cough in a Carload" tagline by hiring John Held Jr. to create his signature Victorian woodcut cartoons (the joke is usually about a male Victorian stereotype being berated for his rough smoker's voice).

But I suspect they felt the need to capture the same flapper audience that the other manufacturers were targeting, so in September 27, 1930 there's a full-page advertisement with a new angle, which I paraphrase as Old Gold is a plucky newcomer who became instantly popular because of its exceptionality, just like This Famous Broadway Star!

I'm sure this is the first in a long line. This time the star is Marilyn Miller:

From her grandmother's cellar...to Ziegfeld's Roof...in just the twinkle of a toe. She really was the "Sally"...of the alley called Broadway.

How to explain the miracle of Marilyn's success?...Nature simply blessed her with a charm all her own.

The real interesting part of the advertisement, however, is the huge picture of Marilyn dancing in a dirty basement. 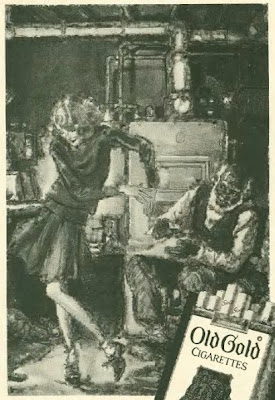 I've mentioned before that some design elements in The New Yorker reflect a shift from the "modern" 20s to a new 30s style. This is definitely one of them. As an added bonus here's the caption:

Ah, the kindly kinky-haired drudge with his native rhythm. There's also a reproduction of the moment when Old Gold's supposedly first arrived in Waikiki, but the quality is so poor I won't bother posting it. Which is a shame because it looks really bizarre.
Posted by Adam Thornton at 6:58 AM