1929 was certainly the year of The Great New Yorker Cigarette War. In terms of advertisements, Chesterfields appear to have knocked off Old Golds and now hold the coveted, full-colour, back page position. And they have all stopped sparring with candy manufacturers, who had introduced a doomed "eat candy instead of having a cigarette" slogan that was easy to attack ("Smoke a cigarette to control your waistline!")

Meanwhile the Spud cigarettes gamely try to keep up. But holy crap, look at this picture. 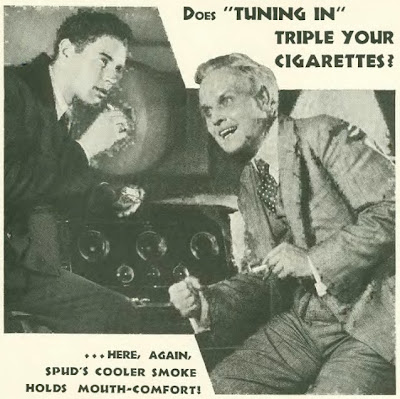 What the HELL is going on? This is, I confess, the wackiest-looking New Yorker advertisement I've seen so far. It looks like the mad professor has just perfected his mind-control machine, and he's so excited that he can barely control his bizarre crotch.

But no, that's a radio, and they're listening to a football game, and they're so excited that they've started chain-smoking. You see, Spud's angle was that it was a "cooler" cigarette, and therefore its benefits would be noticed only after you had smoked about 36 in a row. Their motto was "Judge Spud...Not by first puff...but by first pack."

Those manipulative, evil bastards.
Posted by Adam Thornton at 11:53 PM

Finally, a socially-responsible cigarette that wants you to give it enough of a chance before judging it. How progressive!

I'm told my uncle (whom I never met, as he died at age 39, a year before I was born) was a 3-pack-a-day man. He might have embraced their Spud's philosophy.

And, yes, the gizmo looks like a mind-control machine (how appropos, given the way cigarttes dominated Madison Avenue for decades). Or, it looks like he's cracking a safe open (no doubt to steal the whole treasure trove of Spuds!).