The articles in the 1929 New Yorker continue to use the stock market crash as fodder for jokes and insults, but now the advertisers are trying the angles: 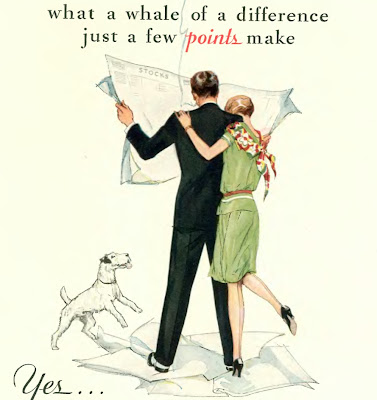 It's an advertisement for Fatima cigarettes, and the tagline is "Yes...and what a whale of a difference just a few cents makes." Fatima's gimmick was that their cigarettes cost more than the rest, but only because they were far superior.

Anyway, what is this advertisement meant to convey? Is the guy in the picture receiving good stock news, or bad? Considering that pretty much EVERYBODY got bad news at this time, it would seem awfully strange to alienate customers by saying "Ha ha, YOU might have lost everything, but FATIMA smokers didn't!"

On the other hand, if the guy in the picture DID lose everything, why are they all so happy? Is it because they have a backup plan: to put their amazing levitating dog on the vaudeville circuit?

I don't know and I am confused.
Posted by Adam Thornton at 8:02 AM

The woman, at least, seems jubilant (note the kicking leg) and the dog seems happily excited.

Maybe Fatima's ad agency figured that the crash was a passing thing and prosperity was really just around the corner.

Oh, well, what to do while waiting for a recovery? Yes - smoke premium cigarettes so the neighbors will never know your dirty financial laundry.

What occurred to me later was that maybe the ad was made previous to the crash? Maybe it's supposed to be jubilant, and they'd booked the ads in advance? I imagine that full-page colour ads took some amount of planning.

I had thought of that, too. If so, talk about poor timing!

Perhaps there should have been an alternative ad - ("No, run the ad about spending those last few cents on Fatimas...").