Here we thought that 1920s inventors just invented useless stuff like radio, and talking pictures, and automatic toasters. But no! They also invented...the Player Cornet! 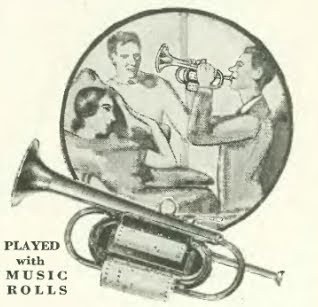 Try to tell me that this wouldn't have been annoying at parties. As described in the October 5, 1929 issue of The New Yorker:

Rather clever of those Europeans...now they bring us a new type of cornet that plays from music rolls, but is not an automatic playing instrument...

The music roll selects the correct tones or notes but you control everything else necessary for the playing of a melody with the feeling you want to express.

The blowing into the instrument to produce the volume, movement of the music roll to regulate the tempo are controlled by you. If you can hum or whistle a tune, ten minutes of practice will enable you to play the melody.

It was available at Mayfair Playthings Store for only $12 (with two music rolls included), but for some reason I can't find any online references to this instrument. How the heck did it work? Can I buy one now?
Posted by Adam Thornton at 1:45 PM

Well, it's more portable than a player piano!

Given the probable volume/annoyance factor, I'd assume the opportunities to play it are limited.

Maybe this invention was the Roaring Twenties' answer to Guitar Hero - back then cornetists were hot, so if you wanted to wail with the best of them, this was your shot. No PC required!