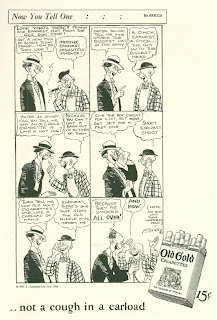 Another set of ongoing advertisements in The New Yorker is "Now You Tell One," a 100% unfunny ad-comic that started appearing in the Spring of 1927.

Drawn by Clare Briggs -- who produced one of the first (if not the first) newspaper comic strips -- the advertisements are usually about a wife who forgets to buy Old Gold cigarettes. Her husband is forced to smoke ANOTHER brand of cigarettes while doing some important piece of work (talk on the radio, give a speech), and he ends up coughing all the way through.

The strips always end with somebody saying that Old Golds have "not a cough in a carload," which is not the world's best punchline, believe me.

Here's a slightly different take on the gag, featuring "Frank and Earnest" (not to be confused with the comic strip from the '7os), "direct from the Gus Sun Time" (a vaudeville circuit). I suspect that Frank and Earnest actually existed -- because of their fleshed-out style and the weird note at the end -- but I can't find anything about them online. Either way I hope their routines were better than this.

"Got a new pair of shoes today, Frank...how do they look?"

"Maybe you can tell me who wears the biggest hat in the army?"

"A cinch, Earnest, a cinch...the guy with the biggest head."

"You're so smart, can you tell me why an Old Gold cigarette is like a hot dog?"

"Because you can't get a bark out of either of them."

"Give the boy credit for a hit. But now get set for a fast one."

"Then tell me why Old Gold Cigarettes are like a carload of hams."

"Earnest, THERE'S one that stops the old riddle king. Infrorm me."

"Because they're smoked ALL OVER!"

The cartoon ends with this comment: "Note: The boys like their vegetables FRESH."
Posted by Adam Thornton at 7:22 AM

So, about the Frank & Earnest cartoon strip of the 70's: do you remember anything about the premise? I was to young to appreciate the dialogue, so all I remember is the graphics. What I do recall is that Frank & Earnest where two disheveled looking bums, that didn't do anything! The just sat on park benches, and shot the shit. Can you imagine a main stream paper today, publishing a strip about two lazy bums?

You know, I think Frank & Ernest are STILL in the paper. And at one time they were the only moderately funny strip in there...

Yes, F & E are still around--today's one-panel strip shows four men--I guess they are supposed to be demons, since they are standing in flames, but they have no horns or tails--standing around a sign that reads: "7 Deadly Sins Duty Roster":

And one is complaining, "Just once I'd like to get assigned to sloth or gluttony like the rest of you guys!"

So he must be Frank.

I would love to have a witty quip here, but my humor gland has dried up after reading the rest of today's comics...

Perhaps Frank realized the importance of being Ernie.

(my attempt at witty quip)