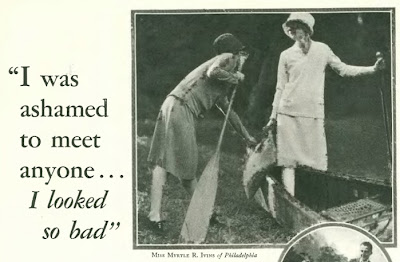 From its inception The New Yorker has carried weekly advertisements for Fleischmann's Yeast, which apparently cures everything from acne to insomnia, meanwhile improving "digestion" and upping the energy levels of people who had all but given up hope.

The ads always have photographs of healthy, vigorous people demonstrating what they can now do thanks to Yeast. All of them were in some way notable before their digestive/acne/blood problems began, and all of them are now able to return to the strenuous activities with made them notable in the first place: dancing, golfing, fishing.

Here's a sample testimony for Miss Myrtle R. Ivins from Philadelphia, pictured above:

During business hours, I meet many people, including the officers of the large firm where I work. Naturally, my embarassment was almost unbearable when, after an illness that upset my blood, my face broke out in pimples. I was actually ashamed to meet anyone.

What made it hardest to bear was that formerly my skin had been especially clear--kept so by an active outdoor life. I played some tennis and golf, swam and rode a little, and had done my share of hiking. But I had to give up all these sports, I was so badly run down. My whole digestive system became unbalanced.

My doctor suggested Fleischmann's Yeast. Today, after eating it faithfully every day for over six months I feel fine. My face has improved greatly. My appetite is splendid. I'm able to be back in the open once more, enjoying the sports I love.

By the 1940s these "yeast miracles" became fodder for radio comedians; I've heard many radio spoofs of the time that feature over-the-top testimonials about the life-changing effects of yeast.
Posted by Adam Thornton at 7:34 AM

The totality of inanity in this ad is staggering. What kind of an illness "upset [her] blood"? Syphilis? And that picture--the woman getting in the canoe looks like a female Long John Silver.

I remember packets of Fleischmann's Yeast in our pantry while I was growing up in the 1950s. Since they were small and sealed, I never gave it the kiddie taste-test. I wonder what my mother used it for, since she never baked bread (in the days of "Wonder Bread builds strong bodies 12 ways!").

perhaps you can fill the cracks in your stairs with yeast.

Maybe your mother had a "blood upset" that she never told you about?

I can't help wondering what it tasted like, never having eaten a package of yeast.

I would, Morgan, but I have a feeling the smell of decomposing bacteria would start to bother me after a while! Not to mention the sight of my stairs RISING in the warm weather...