The Cat and I 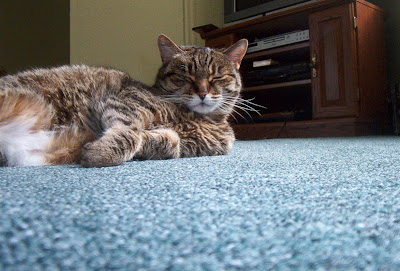 I grew up with all sorts of pets. Living on a farm, we weren't limited when it came to space or animal husbandry; hamsters, gerbils, mice, budgies, cats, dogs, rabbits, lizards, a racoon and -- yes -- a tarantula named Legs who poisoned my father's wine.

After I moved away from home I didn't feel comfortable having pets, because I lived with unpredictable people. But when I got my own apartment seven years ago there was no question about it: I needed a cat, and I needed one who would allow me to pet its belly.

So I went to the Humane Society, since I'd rather rescue an animal than pay $500 for a cozy inbred pet store creature. They had lots of cats, but when I came to Zsa Zsa's cage she immediately rolled on to her back, kicked her legs in the air, and started to purr. She wasn't going to just ALLOW me to pet her belly, she was going to REQUIRE it. Zsa Zsa was mine.

We have always had a good relationship. Sometimes she gets too needy and begins to meow plaintively, and when I'm trying to work or trying to sleep that can drive me into a fury. In return I don't clean her litterbox as often as I should, and she doesn't contribute monetarily to the household, so I think we're pretty much even.

When I come home she flops onto her side, squeals, and begins to kick herself across the carpet. This is her "seal impersonation," and you are supposed to respond by enthusiastically petting her. If you do a really good job she begins to drool. After that she leaves me alone until the afternoon, when she sits either on me or beside me as I do whatever incomprehensible things I feel the need to do.

She rarely wants to play. When she does, her favourite game is to hide behind something and watch ME play, which I quickly get bored of. When she walks into a populated room she announces herself calmly. When I take a bath she does perilous tip-toes across the edge, and though her tail gets wet she never falls in. Sometimes she drinks out of the toilet and licks her butt. She is meticulous in her grooming.

Our new apartment is heaven for her, because she has access to most of the windows and they overlook scenes with bushes and trees. In the bushes are birds, sometimes squirrels. She hunches down and wiggles her bum, but never pounces. She does not see herself in mirrors, doesn't recognize cats on TV, isn't afraid of thunder, and can't seem to hear cats or dogs, either live or electrically reproduced. Though if I imitate her she will imitate me, and we can have a nice conversation this way.

On Saturday nights, when I come home drunk, she is very calm and understanding. The next morning she literally demands soft food, which she only gets after I've been drinking. She gleefully scratches at the furniture even though she has no claws. She stomps around in a tiny circle before lying down, even though there is no grass. If there IS grass somewhere she'll eat it and not throw it up.

Her favourite spots are the couch, the computer chair, the sun-drenched living-room floor, and under the armchair. At night she waits patiently while I read in bed, usually lying in the scoop between my ribs and my hips. When I turn out the light she'll sometimes scratch at the covers until I let her go underneath, where she curls against me and crackles and sometimes dreams. When she wakes up from a dream she "talks" frantically, looking all around the room, and eventually runs away to take stock of the situation. At 3am, when I wake up, she's always lying on the bed hoping to be petted.

This morning, at 3am, she had sticky black gunk on her head, where her mast tumour is. I clipped away the hair; the tumour was ugly and crusted up. I positively could not sleep and regretted that I hadn't written down the way we lived together. When I finally did sleep, I dreamed she was in a sack and I couldn't get her out.

This afternoon I put her in her cat carrier and took her to the vet. The vet took a look at the tumour, said "oh, yeah," and gave it a steady squeeze. Black sludge oozed out of Zsa Zsa's head in a thick tube, like rancid toothpaste. She kept squeezing until all the sludge was gone, and so was the tumour, then she washed it off and said it would probably fill up again eventually. She says the sludge is a combination of mast cells and melanoma which -- she assures me -- is pretty much harmless. I'm to watch for infection and not worry about it; the tumour just "popped" when it got too full.

The vet likes Zsa Zsa and didn't charge me anything for the visit. On the way home the cab driver told me about how he'd had to put his own cat down, and that it's something you never want to happen but will always eventually happen.
Posted by Adam Thornton at 7:21 PM

Cripes! You got me all choked up.

And then a happy ending--or, as happy as endings are in this world...

Gack! Is this some kind of revenge for me sending you the clip of the baby farting?

Vanilla, there is NO adequate revenge for you sending me the clip of the baby farting! If that was a war, you won immediately.

But next time her tumour fills up, you can come with me to the vet and see it all for yourself.

> Cripes! You got me all choked up.
> And then a happy ending--or

Oh yes, I definitely needed a happy ending and an anti-climax!