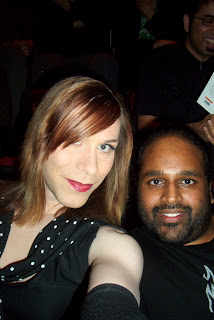 Whew! The final night. After lunch and drinks with my mom (and a few ZZs), time for:

Or perhaps 8:00 PM, depending on your source. I came in late but managed to see most of what transpired.

I always assume that people "dress up" when they go to the Centre in the Square, and I'm always surprised that nobody does but me, which means I don't learn lessons very well. The KW Symphony performed four pieces, the first two of which I saw from a blurry perspective and far removed from the ideal acoustics.

Kleines Requiem fur eine Polka (Henryk Gorecki) and Crystal Fragments (Peter Hatch). Nope, I didn't like them. Didn't feel a thing. Had the usual thoughts about deliberate unconventionalness, though both pieces had a fair share of melody and structure. Sitting, staring straight ahead, thinking about my footwear, it ocurred to me that somebody looking at my face might think I were enjoying the music or at least paying attention. Usually you can tell when somebody is enjoying their own disconnected internal world, but not always. So I stared straight ahead, thinking that I might look appreciative, while only staring straight ahead. I tried to imagine how people look when they appreciate things, but I didn't want to experiment for fear of getting foundation on my gloves.

The world premiere of Linda Smith's Wilderness grabbed me by the heart and didn't let me go. Quiet and meditative, no gimmicks, it appeared to come out of her soul without guile or self-consciousness. Lovely.

Peter Hannan's Side with Entropy, however, wins this year's Muffy award for most awful Open Ears piece. In order to qualify for this award the performance must be high-falutin' and pretentious...and totally fail to achieve its goals. After introducing the piece as an attempt to blend electronic gadgetry and samples with a modern orchestra, Hannan bashed out an awful string of cheesy sci-fi boops and whizzes, even worse than the ones you saw on Star Trek. This might have worked if it somehow matched with what the orchestra was playing, but no...they were off on their own tangent. It was laughable and stupid. Not quite as laughable and stupid as last festival's opera about serial killers...but close.

At every festival there are people who rave about the performance even when you can tell they didn't like it. Two elderly ladies were gushing to each other afterwards: "It reminded me of...Star Wars! Or E.T.!"

(That picture up there is of Beetle and I waiting for the show to start...thanks for all the fun, Festival-Buddy!)

Robin Rimbaud (Scanner) gave us a smart and funny introduction to his project: radically recutting Jean-Luc Godard's "Alphaville" and providing a live soundtrack to it. Without the dialog -- and with most of the human scenes removed -- I might have found myself hungry for plot, but instead I just drowned in beautiful cinematography and remarkably human electronic music. Images of faces and buildings and cars and machines -- lots of machines -- with inexplicable body movements and long quiet static shots, I found it difficult to separate the music from the film. Sad and funny and over-the-top, not a single false note, sheer innovative brilliance without seeming forced or derivative. Loved it.

By midnight the party was just starting at the Former Kitchener Legion. Billed as sort of an unofficial "after party" for the festival, it was shaping up to be an shockingly average hip-hop night. No liquor, only beer and wine. Uncomfortably warm and stifling. People from the festival filtered away into the night, adequately replaced by the very young techno kids who were surely the target audience. The beginnings of a strange gut-rot and the realization that I'd put off getting sick for far too long: I was not feeling well and I couldn't stand the music.

Then the drums started piling up around the dancefloor and I knew we were in for some raucous tribal drumming.

Definitely time to leave before that happened.

As a postscript I dipped into Club Abstract, but my metabolism was winding down and alcohol wasn't going to help. Time to go to sleep and reflect on the festival.

By far, my favourite moments were Barnyard Drama and Scanner. I guess what I liked most about them were their willingness to embrace some degree of convention, and their largely unpretentious demeanor. It didn't hurt that they both consist of extremely talented people.

Those two shows alone were worth it but I saw enough other fun things to make it more than worthwhile. Now it's time to get back to my life, and I'm actually looking forward to that.
Posted by Adam Thornton at 1:25 AM

I'm sorry it didn't appeal to you and that you weren't feeling well. But in our defence, there was no thermostat and we shut off the radiators by hand a few hours before, who knows why they were still on. Maracatu perform a percussion style that dates from colonial Brazil and is an interesting mix of african and colonial drums and rhythms and the singer's voice is like glass. We played no techno. These nights often take until 2 or 3 to settle in and are marketed to people who find bars boring and 'usual' social spaces completely uninspired. A lot of the music was great, Patti Schmidt's set was amazing.

I didn't hear any techno while I was there, I was going from comments I heard from several (enthusiastic) people who kept calling it a "techno party."

As for the drums, I assumed -- since the drums were appearing at the edge of the dancefloor -- that it was just going to be a "drumming free-for-all" along with whatever music the DJ was playing.

I really have to make it out to more adventurous music shows.

I really have to make it out to more music shows, period.

eeeww, drumming free-for-all! That's horrible! I admit we want beats because we want people to dance but we don't want pointless self-expression which smells up the place. Akufen, the headliner, plays near-experimental, deep & sexy minimalish dance music and he's performed his more conceptual work in many galleries including London's Tate Modern. We don't do tribal drumming.
It was very difficult to mount an all-night party in a city owned building that has been left to rot for five years. The fire chief is still fuming. We didn't even have working plumbing until Friday. We couldn't even cut up the fruit we were serving because there was no time for the 'health inspector’, and we were not allowed to serve
'processed foods'. What is this, Ontario? I just wish we had time to make a nice place to sit..
Peter Hatch stayed late and liked it a lot...
And the flugelhorn player from Belle Orchestra was a schnerg so we asked him to leave.
But the girl who made a closet into a change room and came out in a new crazy dress every 20 minutes was brilliant.
Anyways, forget the public, I'm making my own art for a while...

You're in Toronto, Eli...you have no excuse!

Except for the excuse that I use, which is that it takes a lot of effort to seek out these performances, weed out the bad ones, buy tickets, clear your schedule, work out transportation, and still manage to get to your job the next day.

So if any of those apply to you, I suppose you DO have at least one excuse.

That's probably the first time you've had the opportunity to kick a flugle horn player out of an event.

Akufen would have been good to see, I was looking forward to a DJ playing something out of the ordinary!

I heard about the "fruit code," and I certainly felt your pain about the problems with the building. Suddenly you parted the gathering crowd asking if anybody there was a certified electrician. This reminded me of those airplane movies: "Can anybody fly a plane?"

Seating would have been VERY good, but I can see that "plumbing" and "lights" and "a door that isn't padlocked by the fire department" would take priority.

It's the sad truth that we fickle public are never all happy. Given the different origins and expectations of the crowd on Saturday night, the task was probably even more difficult.

I admit that when I see a bunch of hand drums, I want to run like hell. It's a revulsion to those hippy Tam-Tams (or whatever you want to call them), or some men's movement 'inner-warrior' group, or some new age group therapy thing. PEEEee-UUuuoo!

Now, some professionally executed latin beats...I can dig it.

Someday I'll write the post that explains my recent "Thought DOESN'T Count" revelation, and how it connects to drum circles and pointless self-expression (I like that phrase!).

In short, though, professionally executed Latin beats are impressive and (yes) professional. They involve skill and technique and knowledge, and possibly ideology and history.

Whereas self-expression CAN be professional, it usually isn't, and is all about how "the thought counts." Since you can't know what a person is really thinking, and since we're conditioned to simply accept that "the thought counts," nobody's allowed to step up and say "hey, you're not very good" or "hey, we're not here to be entertained by you."