"If I Were Queen of the PATH" 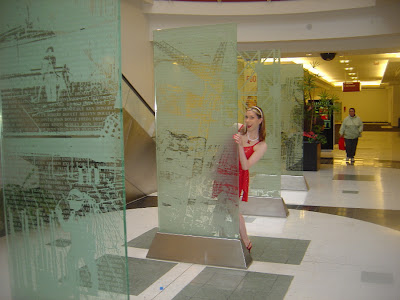 I don't make blog announcements BEFORE I go away on a trip, because I don't want y'all breaking into my apartment and stealing the few clean socks I have left. But now that I'm back...

Yes! Today was the day to meet with "Team Daily Muffy Toronto" to prepare and photograph our next adventure: "If I Were Queen of the PATH."

For those who don't know, "The PATH" is a huge network of tunnels and walkways which connect many of the buildings in Metro Toronto. Our mission was to start at the southernmost point -- the Air Canada Centre -- and zig-zag back and forth until we arrived at the northernment -- the Atrium on Bay.

For some reason this was one of the most exhausting experiences in our lives. It wasn't just the walking -- I think Craig guessed seven miles, much of that on slippery tiles -- but there's something soul-sucking about spending three hours in endless corridors, riding endless escalators, and walking past endless rows of closed and darkened stores.

What's more, my intense animal magnetism blew up the transformer at The Hudson's Bay Company, cutting off power to much of the downtown core. So our final walk through The Eaton Centre was sort of primitive and surreal.

When we got back to Jason & Craig's to download the photos we expected little more than unworkable dullness...but wow, these pictures are lots of fun! So this is the only time that I'll admit that it was all very hellish and monotonous...from now on, the official word is "it was a RIOT!"

Menaced by hockey players, gang bangers, and space-time vortexes...crashing an odious "get rich quick" convention...escalators, fountains, labyrinths and cold rain...we got a lot of mileage out of those miles!

We ALSO recorded a few high-quality video clips, so you'll get to see Muffy In Motion (and not on a carousel this time). I'll let you know when they're on YouTube.

And now: a shower and a sleep. There's only so much havoc we can cause in a single day!
Posted by Adam Thornton at 10:19 PM

Every time I look at that picture, I want to set up a meeting with Guy Caballero and pitch him a new program for SCTV:

"It's about this young professional from the hinterlands who comes to the big city and makes good. You could use some of your own employees as characters--Earl Camembert as the clueless news anchor, Edith Prickley as the man-hungry older woman--and you could call it 'Muffy Tyler Moore' or 'That "Girl."' Because you see, there's a twist..."

T.O., T.O,
It's a wonderful town,
The Annex is up,
The Harbourfront is down.
The PATH people walk
in a hole in the ground...

I'm partial to "Under the Town," because I do have a replica of Ann's "Empire State Building" dress, but PLEASE don't pair me with Jules Munshin!

Aha! So it was you caused that blackout. Nice job. :D

I assume it didn't reach your place? Though hopefully you didn't have to travel much in the effected area, it was slow going...no streetlights.

The Eaton Center was crazy: full of people wandering around in the dark, the stores closed and locked up...but all the WORKERS still behind the cages, standing around and watching the crowd. And that was three hours after the power blew. I wonder if they were there to make sure nobody decided to loot...

Nah, we're miles from there, on the Danforth.

My roommate wants to know if it looked like Dead Rising (a video game set in a shopping mall full of zombies).

I didn't see any blood or intestines, and it was awfully dark, but otherwise: yes, I bet it DID look like a zombies-in-a-shopping-center video game!

Very echoey too, since everybody was tittering excitedly and there was no ambient music (or tinkling fountain) to compete with.

Meanwhile, on the street outside...

What a BEAUTIFUL picture!

Speaking of foam, your shaving cream is here in our bathroom...

A little bit of Muffy to remember you by!

No, wait! I used YOUR shaving cream, remember?

Unless you mean I've left splotches of shaving cream in your bathroom, which sadly may be true. :)

Good night! Neither of us recognized the brand of shaving cream in the bathroom, which is why we thought it was yours. Spooky!

The mystery shaving cream must be my prize for securing my "Queen of the PATH" thrones, though I could have used a stick of deoderant instead!

The Gods of the Drug Mart are fickle.

And it's encouraging that when you say "Good night!" *I* know what you mean.