How to Destroy Your Child's Natural Digestive Processes 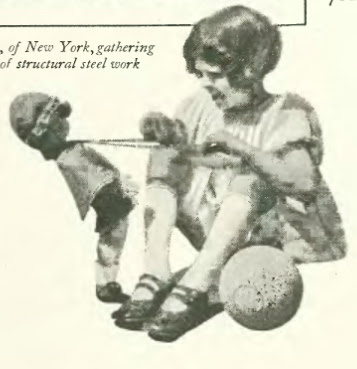 "MY DOCTOR had prescribed Fleischmann's Yeast for my brother-in-law. So when my daughter Margaret became bothered with constipation it was the first thing I thought of giving her. At first she took it dissolved in milk, but later she ate it just like candy. In a month she was perfectly normal again. Now, whenever she goes into a store with me she says, 'Don't forget the Yeast cakes, mother.' They have been nuggets of gold to me."

The kid still looks constipated to me, and she's strangling a doll.
Posted by Adam Thornton at 7:29 AM

I wish an old person would leave a comment explaining their generation's obsession with bowl movements. To think there is a whole secrete world of grandpas that lock themselves in bathrooms to regularly give themselves enemas, or leave unflushed "gifts" in public toilets as an expression of their health & cleanliness.

Yeah, what is that all about? Does it have something to do with not blocking the flow of your 'chi' or opening your chakras or something?

Also, she's strangling the doll because she is trying to hold it for FIVE FREAKIN' MINUTES and is woefully unable to due to her constant yeast absorption.

There was definitely, at one time, an obsession with "keeping regular." Maybe it was the one freaky part of human biology that they really knew how to control, so they went for the gusto! Now that we have pills that affect every aspect of our bodies, "a good dump" no longer seems that important.

Or maybe our today's food keeps us more "regular" than the food of previous generations?

All I know is that if you make your kid eat yeast every day so she can have a good poop, she won't be able to poop WITHOUT the yeast. And you're not addressing the actual CAUSE of the constipation.

But I guess it's too late to tell her this.