"Cthulhu" and THE GAY! 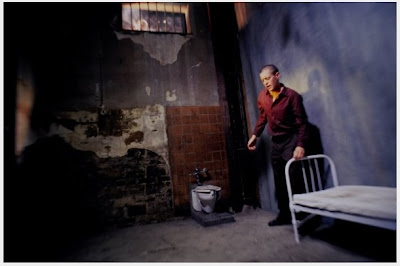 So it was weird for me when I picked up "Cthulhu" in the new releases and saw that it had the "gay sticker" on it. What's this? A queer adaptation of a cheesy H.P. Lovecraft story? I would have rented it anyway but the sticker made me doubly curious. I hoped that the movie was one in which the protagonist just HAPPENED to be gay -- as opposed to the type of film I'd expect based on the rainbow sticker -- and I was pleasantly surprised because that's exactly what it was.

The plot of the movie wasn't particularly interesting...if you've read Lovecraft's work and you recognize how it could merge with environmental and political apocalypse, then you won't be surprised. What IS interesting, however, is how the sexuality of the protagonist is generally unimportant; it is not more explicitly "gay" than any other movie is explicitly "straight."

Where a gay theme HAS been introduced, however, is the VERY interesting subject of a gay protagonist "coming home" to the inbred small town he ran away from, as Lovecraft's work tended to use the "coming home" theme as part of the horror. There is also a subplot about the desires of the protagonist's family to produce an heir.

There are two really wonderful things about "Cthulhu": the overall tone (lighting, music) and the totally natural dialog, which is mostly free of cliche. Jason Cottle is an excellent actor, and -- surprisingly for such a low-budget movie -- everybody else is top-notch as well. "Cthulhu" could have been really, really good.

Why isn't it? Because it's disconnected and awkward. The pacing is weird. The ending is too ambiguous. And they simply didn't have the budget for any "pay off" scenes. They did the best thing they could possibly have done to sidle around the need for expensive effects -- relying on mood, uncertainty, and quick edits to sell the story -- but horror movies really DO need a bit more than that.

I listened to some of the commentary and it's disheartening to hear Grant Cogswell and Dan Gildark (the writer and director) be so crushingly disappointed with their own movie. I wanted to call them up and reassure them that the film was FAR better than they'd given it credit for. More disheartening -- but hardly surprisingly -- has been the online reaction to the film, where the usual comment is "Why did they have to make the guy gay? Just to be COOOOL?" They seem to miss the wonderful balancing act that the filmmakers achieved: to have a gay protagonist who ISN'T a token, who ISN'T there just to be cool or attract a gay audience.

That last point is the truly sad thing about "Cthulhu," that it achieved something quite remarkable -- and was a pretty good movie as well -- but it's a little too early for the world, perhaps.
Posted by Adam Thornton at 10:02 AM

Interesting stuff. I would, however, mildly dispute the characterization of Lovecraft's work as "cheesy."

Lovecraft is, almost by definition, cheesy. You can't escape the cheese factor any more than you can escape the fact that he's influenced scads and oodles of writers. Lovecraft is both cheesy and great. Not bad for a dude with a penchant for purple prose and a crippling fear of seafood.

It's hard, looking back on Lovecraft after so many decades, to say just how cheesy he was. He certainly was ahead of his time in a lot of ways, and his "mythos" was pretty nifty.

But as a WRITER -- like, somebody who actually creates a plot and puts words on paper -- I consider Lovecraft to be pretty cheesy, what with his characters who tend to conveniently faint before the Big Revelation.

You are so right about the rainbow sticker being a two-sided coin. In fact, that's the main reason I didn't put one on CTHULU's box until it had been on the shelves for two or three weeks. Let a few people rent it on its merits, then let the GLBT customers who might be turned off by the cover/subject know it's of interest by putting on the sticker later. Not perfect, but in the end you get a few more open minds. One person who rented it during the non-sticker phase brought it back complaining about the gay content. Too bad.