Living with a Cat Who Is Mental About Water

Zsa Zsa has always been obsessed with running water, but as her kidneys continue to deteriorate -- and, maybe, as she grows increasingly senile -- this water thing just keeps getting crazier.

Last month I realized that her FAVOURITE way of drinking water was to lick it off of a wet loofah. You see, I have a synthetic loofah ball hanging off my bathtub tap, and every time I finished taking a bath she'd jump in and start licking it.

I figured that was an easy way to make her happy, so I broke my cardinal rule -- "Never encourage irrational behaviour in my cat" -- and started running water over the loofah "on demand." The problem was, the demand was CONSTANT and her cries became increasingly strident. She stopped reluctantly drinking out of the water bowls I've scattered around the house, instead sitting endlessly in the tub and yelling at me to pour more water, damnit.

That alone would just be sort of sad and pathetic, but I became TRULY annoyed when I realized that she'd only lick the LEFT half of the loofah. The OTHER half was perfectly wet and accessible, but she'd just never lick it. Only the left. This doubled the number of times I had to accommodate her already bizarre obsession.

I've gradually stopped her from yelling at tje loofah (by instead presenting her with a fresh bowl of water), but last week we moved to a new level of crazy. Now, instead of waiting for the tub to drain before licking the loofah -- which she still does religiously after bathtime -- she'll dive right in and start drinking before all the water is gone. Here she is. 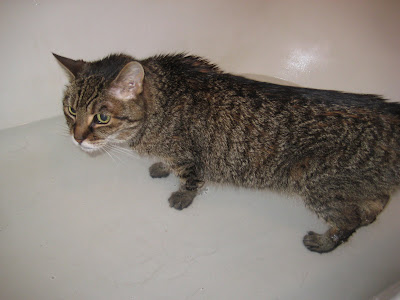 There's no solution: she's thirsty AND crazy. It's a good thing we're in love.
Posted by Adam Thornton at 5:37 PM

I recommend the CatIt drinking fountain for a cat that is obsessed with running water. My cat adores hers and now rarely looks to other sources for her water.

Hey I know you are even more anti-pathic towards reading already made authors than me. but do borrow Marley and Me from your friendly neighbourhood library. You might get the feeling that hey, you would have written just as well - thank you very much - but you will KNOW that this is what is required to capture a zeitgeist ^H ^H Haustier-geist. :)

I would have expected demands for triple-filtered spring water. But to lick water from a glorified bath sponge - yeah, that's weird.

However, water is a must, so - as the saying goes - do "whatever it takes" to hydrate her.

The maker of a cat food-bowl had it right. The inscription read, "Dogs have owners; cats have staff."

Good luck on this new assignment.

Hey Muffy!
I'mmm backkk.......!!!
Sorry I have been gone for so long and I am soooo glad I am back and reading your delightful and NEVER ever ordinary blog.
I have missed you!
As for Zsa Zsa, why would you think that a cat who lives with a diva wouldn’t be one hercatself???
Oh course she drinks from the loofah!! What divavcat wouldn't?
I used to own a Siamese cat named Diablo (yes he was a devil cat) who used to sit on the toilet tank and flush the toilet over and over. I couldn't lock him out of the bathroom because there was a sort of cubbyhole between the hall and the bathroom that he would crawl up in to get through to the BR. It was easier to let him play with the flusher than to try to stop him from trying to get through the cubbyhole. He also adored baths which was a pain because we didn't have a shower back then. SIGH....the things you do for your kids....um I mean cats.
Bye for now and I’ll read you soon.
Lois

PS...did u change the spelling of your blog or was i just reading it X =(wrong) all along?