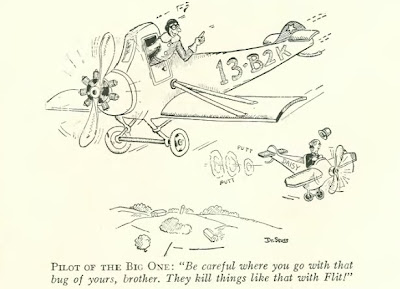 Dr. Seuss was nothing if not imaginative, and he certainly knew how to work the current fads into his advertisements. But none have been so faddish as this one.

Immediately after Charles Lindbergh flew his famous 1927 flight, The New Yorker began covering every aspect of the airplane phenomenon. They tried to be cynical and reluctant about it, but that didn't stop them reporting about the latest airports, and the latest enhancements, and even sending one of their reporters in a flight over Manhattan.

By the time of this Dr. Seuss cartoon -- August 31, 1929 -- the fad had reached its height. The New Yorker was FULL of advertisements for $2000 personal planes; they even outnumbered the car and cigarette ads!

I'm not sure when the dream of "an airplane in every home" came crashing down. The depression probably killed it, as did the realization that businessmen didn't like having to FLY THEMSELVES to the office, and it would take a while for a really comfortable passenger plane to appear.
Posted by Adam Thornton at 8:21 AM

At least the skies were a lot emptier back then. When names like Wright, Curtiss and Lindbergh were cutting-edge.

Wonder if I can still get a seat on the old PanAm China Clipper...