What Makes the Picture Talk?

If you were a moviegoer in 1929 -- and who wasn't? -- then you might have wondered how the "talking pictures" worked. Fortunately Western Electric put this somewhat pushy advertisement in the August 3, 1929 issue of The New Yorker. Click on the picture for the full gorgeous schematic, including the stylized "horns" which look more artsy than functional. 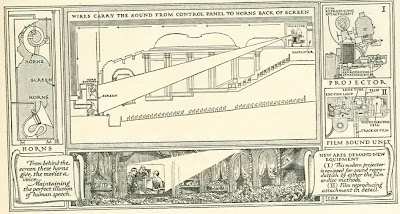 This advertisement graphically shows the reluctant transition from the Western Electric-developed Vitaphone (sound on disk) technology to the superior Movietone (sound on film). Though not actually developed by Western Electric, the company was anxious to cash in SOMEHOW on the new techonology that was making the Vitaphone obsolete...so they sold these Sound Picture systems to make use of both methods, and then promoted the heck out of their own contributions ("Sound pictures came out of the telephone.")