The last time we joined the Edicraft company, they were saving marriages with easy-to-make toast. But apparently that wasn't enough.

She poured. He tasted. She smiled. He scowled. She wept. He left.

And thus was another romance drowned in a cup of pallid coffee. Higher courts have ruled that grounds in the cup are grounds for divorce in every state of the Union...

Yes, the folks at Edicraft must have realized that divorces happened even for those who owned the Edicraft Speed Toaster! A new innovation was required to keep men from scampering at the breakfast table... 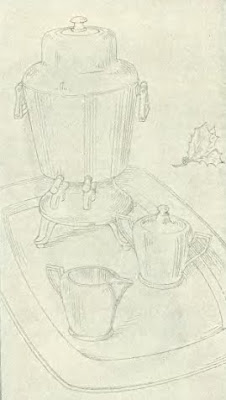 (Mistletoe not included, and best not put inside the Siphonator anyway).

"Electric, automatic in operation, massively-modern in design," the Edicraft Siphonator was...well, a coffee maker. The advertising copy fails to state why it's so darn great, except for mentioning that it has a "left-hand tap" which dispenses hot water for tea...or for diluting the coffee you've poured out of the right tap.

So on Decemeber 14, 1929, the Edicraft people had found a new way to keep marriages together. But what, I ask, of the undercooked pancakes?
Posted by Adam Thornton at 7:59 AM

Oh, thank goodness that our pre-Starbucks, pre-Dunkin' Donut and pre-Horton's forbears could make such flawless coffee in their own homes!

As to the sub-standard pancakes - quick, more butter & syrup!